The total number of restatements and individual companies disclosing restatements in 2021 rose to their highest levels since 2006, according to Audit Analytics’ latest annual review. However, excluding special purpose acquisition company (SPAC) restatements, total 2021 restatements declined by 10 percent from the prior year. 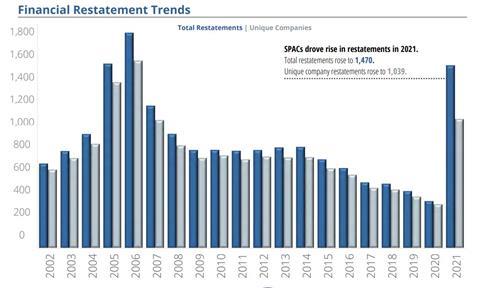 In contrast, non-accelerated U.S. filers represented 73.1 percent of restatements in 2021—an increase from 40.7 percent in 2020 and the highest percentage since 2008.

Other frequent areas for restatement in 2021 were liabilities and accruals (11.7 percent), general expenses (10.9 percent), tax matters (8.8 percent), cash flows (7.3 percent), and share-based compensation and acquisitions and divestitures (each at 7.0 percent).

Severity: To evaluate the complexity of the restatements, the report looked at several statistics, with higher numbers suggesting greater severity.

Restatement method: The study noted the proportion of restatements made by revision (correcting errors by revising previous periods in the current year’s financial report) for domestic filers, excluding SPACs, aligned with the levels recorded since 2014 at approximately 76 percent for 2021 (79 percent in 2020). Reissuance restatements, excluding SPACs, were at 24 percent for 2021, a 3 percent increase from 2020.