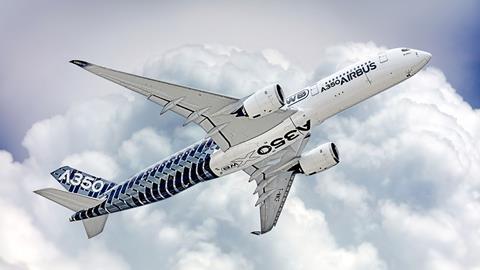 European plane maker Airbus will avoid criminal prosecution after agreeing to pay a total of €3.6 billion (U.S. $4 billion) in penalties to prosecutors in the United States, United Kingdom, and France over an “endemic” bribery scandal that saw the company pay bribes to win contracts in 20 countries around the world.

The total is the world’s largest global resolution for bribery.

The company, which admitted five counts of failing to prevent bribery, had used a network of secret agents to pay large-scale bribes to officials in foreign countries to land high-value contracts between 2011 and 2015.

Under the terms of the deferred prosecution agreement (DPA), Airbus—the world’s second-largest airplane manufacturer—will pay a fine and costs amounting to €991 million (U.S. $1.1 billion) to the U.K.’s Serious Fraud Office, while France’s Parquet National Financier (PNF) will receive close to €2.1 billion (U.S. $2.33 billion). The U.S. Department of Justice and Department of State will get €525.6 million (U.S. $583 million) from Airbus for violations under the Foreign Corrupt Practices Act (FCPA) and the International Traffic in Arms Regulations (ITAR).

The DPA—the seventh finalized by the SFO since it came into effect in 2013—was approved by courts in all three countries Friday and will be in force until Jan. 31, 2023.

The settlement surpasses the £671 million (U.S. $886 million) paid by engine maker Rolls-Royce in 2017, which was the previous U.K. record for a corporate fine for bribery, and amounts to more than half of the £1.53 billion (U.S. $2 billion) total raised through the SFO’s DPAs.

Compliance details of the DPA

1. Airbus must agree to “substantial remediation” and “ongoing improvements” to its group-wide ethics and compliance policies and procedures. The Airbus “Compliance Journey” has comprised a comprehensive set of initiatives to change Airbus’ culture and strengthen the group’s assurance activities and operating practices in recruitment, risk management and controls.

3. At the request of the SFO, Airbus shall also cooperate fully and honestly with any other domestic or foreign law enforcement and regulatory authorities and agencies in any investigation or prosecution of any of its present or former officers, directors, employees, agents, and consultants, or any third party.

The SFO opened investigations into Airbus in 2016 after the firm self-reported incidents of alleged bribery and asked regulators to look at documentation about its use of overseas agents. The French and U.S. investigations started later.

“Airbus’ commitment to transparency with the US authorities and implementation of a comprehensive remediation plan was a cornerstone of this resolution,” said John Barker, a partner in the national security practice at law firm Arnold & Porter’s, which will assist Airbus on implementation of the consent agreement with the U.S. Department of State. “Companies throughout industry should take note that the settlement recognizes the value of identifying and bringing forward compliance issues and working with government authorities to resolve them to establish a solid foundation for future export licensing and compliance.”

It is unclear whether the SFO or U.S. and French prosecutors will attempt to go after the intermediaries who helped pay the bribes to secure contracts. Lawyers suggest this is unlikely.

In her judgment, Dame Victoria Sharp called Airbus’ conduct “grave,” adding “the seriousness of the criminality in this case hardly needs to be spelled out.”

Lisa Osofsky, SFO director, said in a statement: “Airbus paid bribes through agents around the world to stack the decks in its favour and win contracts around the globe. Corruption like this undermines free trade and fair development and it is to Airbus’ credit it has admitted its culpability, cleaned its house and come forward to put this conduct to bed.”

Reading into why Airbus got a DPA

Lawyers believe the DPA marks a “victory on both sides.” Craig Weston, a senior associate in law firm Irwin Mitchell’s regulatory investigations group, says the DPA “represents the end of a long-running saga for Airbus and will be able to provide certainty for their shareholders and allow the company to move forward with their business.”

Lawyers say each DPA gives a little bit of a better insight into what the SFO considers and is looking for when deciding to agree to a DPA. Airbus would have already had to demonstrate it had made compliance improvements as part of the DPA negotiation process.

Ian Ryan, partner and head of business crime at law firm Howard Kennedy, says “this DPA will probably be seen as a victory for both sides. The SFO will provide the treasury with a large windfall and demonstrate that they are able to deal with the most complex of investigations, and Airbus will be able to put this matter behind them and move on. Their share price increased following the announcement that a deal had been struck.”

Ryan says the main lesson for companies to learn is if they or their intermediaries engage in bribery and corruption, they are likely to be hit economically, and it will affect their shareholders.

“Companies will need to have a close look at the DPA judgement to see exactly the level of cooperation and remedial action Airbus was able to demonstrate to the SFO, which enabled the agency to feel comfortable to enter into this DPA. Companies would be wise to then review their own compliance policies and procedures to ensure they remain adequate and effective,” says Ryan.

Aziz Rahman, senior partner at business crime law firm Rahman Ravelli, says “no doubt those at Airbus will rest easy if its past and present personnel enjoy the same outcome” as other executives who were charged but not convicted while their companies qualified for DPAs.

But he adds Airbus has shown compliance and cooperation are key to being considered for leniency. “The firm has certainly attempted to do all it can to achieve a DPA: Senior executives have been removed, its ethics and compliance procedures have been reviewed and revised, and it has reduced the number of third parties it uses in deals. The Airbus board has decided there were benefits to be had from doing all it can to show it is now a ‘new’ company with few links to the wrongdoing that has caused it such problems,” he says.

While Airbus is immune from prosecution (so long as it did not lie or withhold evidence throughout the investigation and continues to cooperate), the SFO says the investigation remains “active” and it may consider criminal prosecutions against individuals—a touchy issue for the agency. To date, the SFO has failed to secure a conviction against any individuals involved in any of the previous bribery and corruption cases where companies have helped supply evidence against former directors and others to secure leniency under each of the six other DPAs.

Lawyers suggest the SFO will “proceed with caution.”

Iskander Fernandez, head of white collar crime and investigations at law firm BLM, believes the SFO will be “itching” to secure its first convictions of individuals alongside its seventh DPA, but believes the agency will “not rush into anything.”

“The SFO has a poor track record in trying to hold individuals to account, and after previous disappointments it will certainly think twice before it seeks prosecutions again,” he says