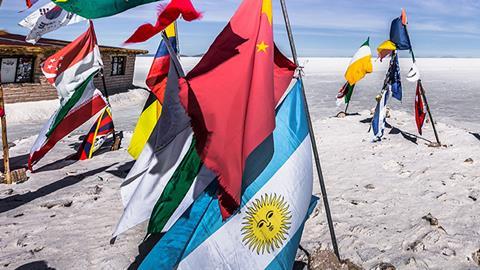 The Americas Society/Council of the Americas (AS/COA) and risk consulting firm Control Risks recently announced the launch of a new index that assesses Latin American countries’ ability to uncover, punish, and deter corruption.

Rather than measuring perceived levels of corruption, the inaugural edition of the Capacity to Combat Corruption (CCC) Index evaluates and ranks countries based on how effectively they are able to combat corruption. Countries with a higher score are deemed more likely to see corrupt actors prosecuted and punished. The CCC Index covers Argentina, Brazil, Chile, Colombia, Guatemala, Mexico, Peru, and Venezuela, which collectively represent almost 90 percent of Latin America and the Caribbean’s GDP.

The CCC Index looks at 14 key variables, including the independence of judicial institutions, the strength of investigative journalism, and the level of resources available for combating white-collar crime. The index relies on extensive data and on a proprietary survey conducted among leading anti-corruption experts from Control Risks, academia, civil society, media, and the private sector.

“An anti-corruption wave has been sweeping Latin America for the past five years, putting powerful figures in jail and shaping electoral outcomes,” said Roberto Simon, senior director of policy at AS/COA. “The CCC Index provides us a comparative tool to better understand this phenomenon and highlight why some countries have had greater success in facing the problem of systemic corruption.”

According to Geert Aalbers, senior partner at Control Risks, the CCC Index offers companies a comprehensive understanding of the nuanced compliance challenges in Latin America. “Companies are interested in how well-equipped countries are to combat corruption and how effectively they are doing so,” Aalbers said.

The CCC Index provides a perspective on how countries in Latin America are faring on this front and is designed to be read in combination with other key indices on corruption, such as TRACE International’s Bribery Risk Matrix and Global Enforcement Report, as well as Transparency International’s Global Corruption Barometer and its Corruption Perceptions Index.

“Over time, greater levels of enforcement in the region will lead companies to investigate wrongdoing and invest more heavily in compliance measures, which will ultimately reinforce the creation of a more transparent business environment,” Aalbers added.

The overall score is formed by three sub-categories: legal capacity; democracy and political institutions; and civil society, media, and the private sector. Fourteen total subcategories were then analyzed.

Under the category of legal capacity, for example, the index looked at the following seven variables:

Under the category of democracy and political institutions, the index looked at the following three variables: quality and enforceability of campaign finance legislation; lawmaking and ruling process; and overall quality of democracy.

Finally, under the category of civil society, media, and the private sector, the index looked at education improvements; quality of the press and investigative journalism; and digital communications and social media.

The CCC Index will be updated annually, tracking countries’ trajectories in the field of anti-corruption. As AS/COA and Control Risks explained in the index, “This will allow us to observe progress over time in different areas, which itself goes to the heart of this index’s mission.”