5
Inside look at compliance challenges of Trump White House 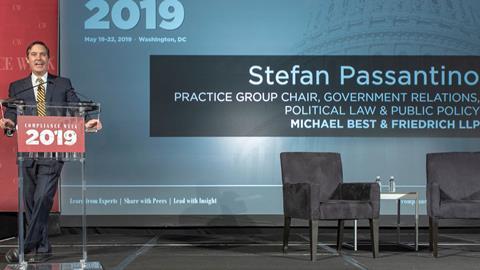 Inside look at compliance challenges of Trump White House

In his earliest days as the first compliance officer for the White House under the current Trump administration, Stefan Passantino got some brutal lessons on setting up a brand new compliance operation—and quickly.

When Donald Trump took the oath of office in 2017, all documents related to the outgoing administration were transferred to archives and retained to comply with the Presidential Records Act. Passantino couldn’t help but notice, as part of the walkthrough for the 30-member “landing team” taking the keys to the White House, that moving crews were packing up the last of the contents of the West Wing.

“We walked into an absolutely empty building,” said Passantino in his keynote address Tuesday at Compliance Week’s annual conference. “There was not a memo, a card, a book, nothing. The moment the president takes his hand off the Bible, if the phone rings in the situation room 30 minutes later, someone has to answer that.”

Passantino is now a partner at law firm Michael Best & Friedrich, chairing the firm’s government regulations and public policy practice and heading up its political law practice. As former deputy White House counsel at the start of the Trump administration, he was charged with creating a compliance and ethics function for a large group of newly installed White House staff, few of whom had ever worked in government, or even in any kind of regulated environment, under a controversial new president.

“No matter how difficult the environment is that one is dealing with, there are a lot of things one can do to prepare for messaging … and execute on that messaging that makes it much more effective.”

“My job was to make sure everyone understands the various disparate new rules that apply when one comes into government service,” Passantino said. That in itself was challenging enough when there was no existing culture, no existing program, and many of the people assuming new positions had never worked together previously.

The first step was to create a high-level training program as part of the onboarding process. “What are the 10 or 15 things a new government worker is going to have to know immediately about the operation of government, the rules, and the different responsibilities?” Passantino asked. “How do we make sure folks stay out of trouble in triage?”

Some critical events in the early days of the new administration provided some lessons on how to issue executive orders, how to deal with the media, and how to prepare for crises, said Passantino. Trump’s controversial travel ban, the opening of the John F. Kennedy assassination files, and even Kellyanne Conway’s remarks about Ivanka Trump’s apparel brand all presented professional challenges that were entirely new to Passantino, he said.

While Passantino may have experienced those high-profile, unusual events in a highly charged government setting, the compliance lessons are applicable to corporate environments nonetheless.

For one, it’s important to understand what motivates the media and how to provide information in a way that’s helpful to achieving the organization’s mission. “No matter how difficult the environment is that one is dealing with, there are a lot of things one can do to prepare for messaging … and execute on that messaging that makes it much more effective,” Passantino said. “We became far more sophisticated and prepared for how we dealt with the media.”

One important lesson was to do a better job of anticipating and preparing for crises. “Before a crisis hits, we all have a checklist in our head of here are the things that could go wrong in the next couple of months or quarters,” Passantino said. “What are the things we’re doing working with compliance and the general counsel’s office to effectively deal with issues that could come up?”

“Lawyers are terrible at this,” said Passantino. “We are the worst when it comes to helping corporations deal with response to a problem.” Lawyers tend to determine the correct way to deal with a problem is to decline to discuss it, he said. “That’s our fallback position but, in the modern environment, that’s rarely the right public relations response.”

“If you don’t understand you have to have very different roles for the general counsel and the compliance office, you’re setting yourselves up for some problems,” said Passantino. “Sometimes those conflict.” Everyone needs a clear understanding of the distinction, he said.