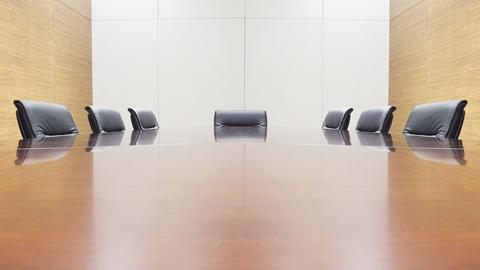 At least a dozen states, to date, have enacted or are weighing statutes that directly tackle diversity in the boardroom—or lack thereof. While some states mandate strict quotas, others are taking a softer approach by urging diversity efforts through disclosure requirements. In either case, corporate boards that have not already done so would be wise to begin strategizing their diversity efforts now.

To be clear, the biggest mistake any board can make is to view and approach diversity and inclusion (D&I) as a check-the-box compliance requirement. Prudent boards that have made the largest gains in D&I efforts acknowledge it’s simply a smarter way to do business. 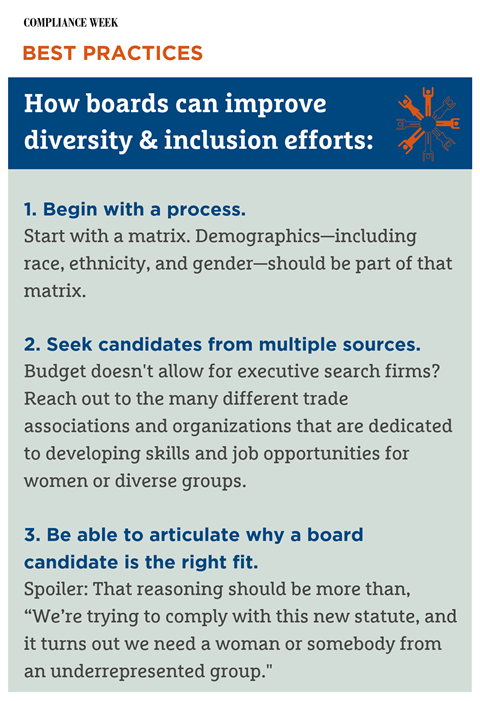 Recent analysis by McKinsey & Company found, for example, that “companies in the top quartile for gender diversity on executive teams were 25 percent more likely to have above-average profitability than companies in the fourth quartile.” Moreover, the analysis revealed that “the higher the representation, the higher the likelihood of outperformance.”

The findings were equally compelling regarding ethnic and cultural diversity. “Companies in the top quartile outperformed those in the fourth by 36 percent in terms of profitability in 2019,” according to the study.

“The key is not diversity for diversity sake,” says Kathy Jaffari, chair of the Corporate Governance & Securities group at law firm Cozen O’Connor. “It is diversity for the betterment of the organization.”

Finding that many companies aren’t making progress fast enough, an increasing number of states through legislative action are putting companies’ feet to the fire. Becoming the first state in the nation to impose minimum board diversity requirements for underrepresented groups, California has the most stringent law in place, setting the model for other states to follow.

“The lack of diversity on California’s boards and upper level corporate positions is a challenge we urged corporations to address on their own during our time in the legislature,” said Assembly member Christina Garcia. “However, it is clear we can no longer wait for corporations to figure it out on their own.”

Under California’s new law (AB 979), signed by Gov. Gavin Newsom on Sept. 30, publicly held companies whose “principal executive offices” are based in California—regardless of where they are incorporated—must have at least one member from an underrepresented community on their board by the end of 2021. The bill broadly defines a “director from an underrepresented community” as those who “self-identify” as Black or African American; Hispanic; Latino; Asian; Pacific Islander; Native American; Native Hawaiian; Alaska Native; or gay, lesbian, bisexual, or transgender.

Companies that don’t satisfy the minimum requirements for underrepresented directors risk facing a fine of up to $100,000 for a first violation and up to $300,000 for a second or subsequent violation. The Secretary of State is tasked with tracking companies’ compliance with the law.

Only over the last year has the diversity conversation really expanded to include race and ethnicity. Gender diversity, on the other hand, has been a hot topic of boardroom discussions for more than a decade now, and many states already have legislation in place urging more placement of women on boards.

Again, California serves as the model here. Under SB 826, passed in 2018, California public companies must have a minimum number of female directors on their boards. The legislation appears to be having an impact: In a report commissioned in March 2020 by the California Secretary of State, 625 publicly traded companies listed a principal executive office on their 2019 Form 10-Ks. Of the 330 that filed a corporate disclosure statement, 282 companies reported compliance with California’s board gender diversity mandate.

Following California, Washington is another state with stringent gender diversity requirements. Under the Washington Business Corporation Act (WBCA), public companies—defined as those with shares registered with the Securities and Exchange Commission—must have a “gender-diverse board” by Jan. 1, 2022. The law deems a public company to be gender diverse if, for at least 270 days of the fiscal year preceding a public company’s annual meeting of shareholders, its board is comprised of at least 25 percent women.

If a public company does not implement any one of these measures, they must explain why. Failure to provide a diversity discussion and analysis in accordance with the WBCA could result in a voting shareholder seeing a superior court order requiring the company to provide the information.

A public company will be exempt from the new board diversity requirements if it’s an “emerging growth” company or a “smaller reporting company”; more than 50 percent of the shares representing the voting power of the company are held by one person or group; the company’s articles of incorporation authorize the election of all or a specific number of directors by one or more separate voting groups; or the company is not required by law to hold an annual meeting of shareholders.

Other states that have passed legislation encouraging companies to enhance the number of women on boards include Colorado and Pennsylvania. Several other states—including Hawaii, Massachusetts, Michigan, Ohio, and New Jersey —have introduced similar legislation regarding minimum board diversity requirements but have not yet taken any formal action.

As it relates to gender diversity efforts overall, while large companies have made the most progress, there is still a lot of room for improvement. According to a 2019 analysis conducted by data governance firm Equilar, women now hold 20 percent of board seats across the Russell 3000 Index, which represents 98 percent of all publicly traded U.S. companies. Sixty percent of women directors filled the seats of boards that were expanded in size, rather than replacing male directors.

New York’s law is particularly notable for the potential scope of it. It requires the New York Department of State and the Department of Taxation and Finance to conduct a study on the number of women directors who serve on each board of directors of domestic and foreign corporations authorized to do business in New York. “New York is home to some of the world’s largest and most influential corporations, so what we do here reverberates far beyond our borders,” said State Senator Liz Krueger.

But whereas New York and Maryland focus on women on boards, Illinois’ diversity disclosure requirements are far broader in scope. Under Illinois’ law, publicly held domestic and foreign corporations with a principal executive office in Illinois must annually report to the Secretary to State, beginning no later than Jan. 1, 2021, the number of women and minority board members.

By March 1, 2021, the University of Illinois will publish annual reports on its Website, providing aggregated data “on the demographic characteristics of the boards of directors and executive officers of corporations filing annual reports for the preceding year, along with an individualized rating for each corporation.” The report “shall also identify strategies for promoting diversity and inclusion among boards of directors and corporate executive officers.”

As social justice issues intensify, so has the board diversity conversation. In an Oct. 28 letter, state treasurers around the country, along with signatories representing over $3 trillion in assets under management, called on the Russell 3000 companies to disclose racial, ethnic, and gender data for their boards.

“The Black Lives Matter movement and the widespread outrage sparked by the death of George Floyd have prompted a national conversation on issues of racial equity and inclusion,” the letter stated. “We urge you to harness this national movement and the momentum on gender diversity to consider publicly reporting the racial/ethnic and gender composition of the board of directors in your annual proxy statement for the 2021 filing.

Companies seeking to improve their board diversity efforts should consider these three impactful steps:

Begin with a process. “Start with a matrix,” says Stewart Landefeld, a partner at Perkins Coie. At a basic level, director candidates should have relevant public company board experience, knowledge, skills, and attributes. Demographics—including race, ethnicity, and gender—should be part of that matrix. Helpfully, the state treasurers’ letter to the Russell 3000 companies contains an example of a board matrix and can be used as a framework.

It’s also wise to consider your consumer market. “Most companies to some degree are selling directly or indirectly to consumers, and if you don’t have a board that represents in some way your ultimate customers, you’re at risk of missing some basic analysis of your product,” Landefeld says. For example, if the company primarily markets to women, it’s prudent to have someone who can bring forth that perspective in the boardroom.

Seek candidates from multiple sources. “ You want to be drawing from the broadest pool possible,” Landefeld says. In this regard, using a headhunter or executive search firm can help, so long as boards understand how that firm sources potential candidates and provides direction for doing so.

Companies that cannot afford an outsourcing option tend to recruit from their own networks. However, if that network is not diverse, “you’re not going to get a diverse candidate pool,” Jaffari says.

One cost-effective solution for finding qualified candidates is to reach out to the many different trade associations and organizations that are dedicated to developing skills and job opportunities for women or diverse groups. The National Association of Black Compliance & Risk Management Professionals and the NYSE Board Advisory Council are two such examples. “There are a lot of great director candidates if you know where to look,” Landefeld says.

Be able to articulate why a board candidate is the right fit. Once you’ve identified an appropriate fit, it’s important that you’re able to articulate why that person is a fit—and that reasoning should be more than, “‘We’re trying to comply with this new statute, and it turns out we need a woman or somebody from an underrepresented group,’” Landefeld says.

No matter the approach taken, it’s important to just start somewhere. Given the intensifying attention that state and federal legislatures are directing toward board diversity efforts, all companies—regardless of size, location, or revenue stream—should already be thinking about ways to improve their board diversity efforts.