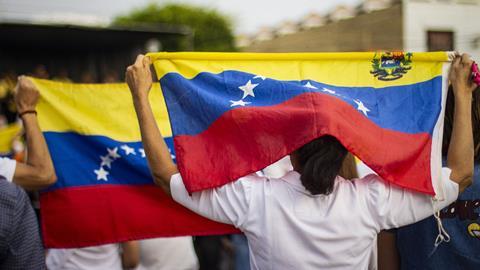 The Financial Crimes Enforcement Network (FinCEN) on May 3 issued an updated advisory alerting financial institutions of continued widespread public corruption in Venezuela and the methods Venezuelan senior political figures and their associates may use to move and hide proceeds of their corruption.

In addition to outlining the corrupt looting of Venezuela’s government-sponsored food distribution program, the advisory provides and updates several financial red flags to watch for to assist in identifying and reporting suspicious activity that might be indicative of corruption.

“The international financial community must be vigilant to prevent exploitation by corrupt regime insiders and their enablers, including front companies and foreign financial institutions that continue to prop up this illegitimate regime,” Sigal Mandelker, under secretary of the Treasury for Terrorism and Financial Intelligence, said in a statement.

On Jan. 23, 2019, the United States recognized the President of the Venezuelan National Assembly, Juan Guaidó, as the interim president of Venezuela and the legitimate leader of the Venezuelan people. The illegitimate regime of former Venezuelan president Nicolas Maduro has engaged in massive corruption through state-owned enterprises and offshore third parties, FinCEN stated. In recent years, financial institutions have reported increased activity with suspected links to Venezuelan public corruption, including government contracts.

FinCEN is warning financial institutions of the misuse of Venezuela’s government-sponsored food distribution program called Los Comités Locales de Abastecimiento y Producción (“Local Supply and Production Committees”), which is commonly referred to as the “CLAP program.” CLAP was created in 2016 for the publicly stated purpose of providing subsidized food rations to Venezuelan citizens.

“The illegitimate former Maduro regime is using the CLAP program to provide subsidized food to its supporters, withhold food from ordinary Venezuelan citizens and those critical of the regime, and enrich corrupt regime insiders and their allies through embezzlement, price manipulation, and trade-based money laundering schemes using front and shell companies,” FinCEN said.

The Maduro regime also has experimented with the use of digital currency to circumvent sanctions and generate revenue, according to FinCEN. It has developed a digital currency called the “petro” and reportedly continues to develop new tokens.

In 2018, Russian bank Evrofinance Mosnarbank emerged as the primary international financial institution willing to finance the petro, FinCEN notes. In March 2019, Treasury’s Office of Foreign Assets Control (OFAC) sanctioned Evrofinance Mosnarbank for materially assisting, sponsoring, or providing financial, material, or technological support for, or goods or services to or in support of, Petroleos de Venezuela, S.A. (PdVSA). Financial institutions are reminded that Executive Order 13827 prohibits U.S. persons from any involvement in the petro digital currency.

“Financial institutions should take risk-based steps to identify and limit any exposure they may have to funds and other assets associated with Venezuelan public corruption fueled by the Maduro regime,” FinCEN said. “However, financial institutions should be aware that normal business and other transactions involving Venezuelan nationals and businesses do not necessarily represent the same risk as transactions and relationships identified as being connected to the former Venezuelan regime.”