10 takeaways from ‘Science of Workplace Investigations’

A sales representative submits an astronomical expense report with some questionable “business-related” claims. An IT consultant comes forward with a sexual assault allegation against a company employee. A hotline caller reports their supervisor is selling drugs out of her office.

These types of scenarios crop up in the workplace, and they are unpleasant for all involved—the victim, the whistleblower, the accused, the eyewitness, and the compliance officer. However, it’s the last individual in that list who gets the unenviable responsibility of serving as judge, jury, and executioner (or perhaps more literally: terminator) in cases of alleged misconduct.

When running a workplace investigation concerning unsavory and delicate matters, even the most confident of compliance officers might take a breath before committing to an answer to the following question: Is the person I am interviewing lying?

The stakes are high; the consequences of being wrong, dicey.  A compliance officer’s assessment of credibility impacts the livelihood of the persons involved—as well as the company itself. If that compliance officer miscalculates the situation and/or believes the wrong party, their company could end up with a lawsuit for wrongful termination on its hands or a pervasive culture of distrust in the organization.

Michael W. Johnson, former U.S. Department of Justice attorney and CEO of Clear Law Institute, offered a “Science of Workplace Investigations” seminar on Tuesday, in partnership with Compliance Week, that delved into best practices for investigations. Johnson’s training is based on research studies suggesting conventional methods of detecting deception are wrong, and that cognitive methods of determining a person’s truthfulness are much more effective. What’s more, employing Johnson’s scientifically validated methods of interviewing, assessing credibility, following relevant legal requirements, and writing concise investigative reports could protect your company from liability if the courts get involved.

Here are 10 takeaways from Johnson’s seminar:

Police interrogations traditionally revolve around confession-seeking techniques: aggression, intimidation, browbeating. Johnson says these techniques are both dated and ineffectual, and that non-confrontational methods are better. Much like a journalist researching an article, a workplace investigator should probe an interviewee politely rather than come on strong. The primary goal is to make the person feel comfortable enough to talk. Once they do, an investigator should let them tell their story like an open spigot—with as few interruptions as possible. The trick is to cull their story for contradictions after they finish. Then, seek out more information, clarification, and elaboration on holes in their story. After you’ve gathered as much information as you can, including any inconsistencies or incriminating evidence, only then do you confront the individual with your suspicions. Importantly, when you do so, present the evidence respectfully in “drip fashion”: piece by piece rather than all at once.

What is the CI method?

The CI method breaks down into seven distinct stages, though not all elements may be applicable in every situation.

2. ‘Being a good interviewer is not about asking clever questions. It’s about being a good listener.’

Johnson also recommends using the Cognitive Interview (CI) method of investigation when interviewing all parties. Initially developed in the 1980s, the CI method includes questioning techniques found to increase the demands of remembering details and thus help spot lies. Broadly, it’s all about being a good listener and allowing the interviewee to drive the interview.

3. Try to reach a good-faith conclusion in every case.

Every case of alleged misconduct warrants and, indeed, requires an investigation. Failing to investigate every single case brought forth by your personnel can lead to long-term negative outcomes. For example, there are some companies that turn a blind eye to a first report of alleged misconduct and only follow-up with an investigation and/or termination once a second allegation has been raised. Johnson says this is a terrible strategy. If a company does not try to reach a conclusion every time a case is reported, it sends the message to whistleblowers that they should fear embarrassment and/or potential retaliation for speaking up. Moreover, it sends the message to wrongdoers that they can get away with bad behavior as long as they are smart about it. Simply put, it is the company’s job to try to reach a defensible conclusion every time, and if an employer makes a good faith investigation, the company is not liable in the eyes of the courts.

4. Discard what you think you know about physical cues to deception.

A lot of people think they can spot a liar based on their body language. Stereotypical cues to deception—gaze aversion, fidgetiness, placing a hand over one’s mouth when speaking—are not actually cues to deception, Johnson says. They might be cues to fear and nervousness. Johnson calls these common errors in lie detection as a belief in “Pinocchio’s nose.” Recall how Pinocchio’s nose only grew when he lied; a common error is thinking a person only avoids a person’s gaze when they’re lying, but they might do so when telling the truth too. Moreover, a guilty party is likely to try to mask signs of stress anyway (e.g. by maintaining steady eye contact). Johnson stresses another significant danger to basing lie detection on a person’s physical appearance is that it invites unconscious bias based on such attributes as gender, race, and physical attractiveness.

5. Be careful of tunnel vision—one way or the other.

Neither assume guilt nor innocence when interviewing someone in an investigation. Naturally, humans have a truth bias, where we assume people are telling the truth, Johnson says. Thus, be careful of confirmation bias, where as an investigator you are misapplying or zoning in on cues that strictly confirm what you already believe to be true. Conversely, be wary of fundamental attribution error, as well, where you assume you know what a person is or is not capable of based on your pre-formed character assessment of them. In other words, don’t jump to conclusions one way or the other. If and when you spot any cues to deception, probe further.

6. Listen closely for changes from a person’s baseline but consider alternative explanations.

The vast number of deception cues considered scientifically validated by today’s standards have to do with listening to what the person is saying—very carefully. A liar might:

7. Workplace investigations differ from what you’ve seen on SVU.

Forget what you’ve seen on TV. The standard of proof in a workplace investigation is not like a criminal prosecution. Courts are generally looking to see if a company performed a good faith investigation and reached a reasonable conclusion. Compared to police investigations, there is a lower threshold of permissibility for a company to perform a search of an employee’s effects.  A company must only have a “reasonable suspicion” to perform a search rather than “probable cause.” In addition, there is no Fifth Amendment when it comes to a workplace investigation; employees do not have the right to remain silent. They can be required to cooperate. Employees also don’t have the right to have an attorney or relative present. (Unionized employees, however, have a right to have a union representative present.) 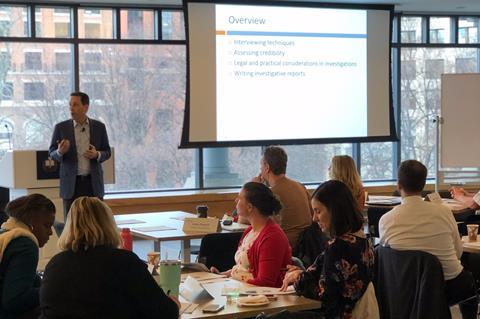 Michael Johnson had a captive audience at Suffolk Law in Boston.

8. Strive never to identify a whistleblower.

This one is a no-brainer: don’t identify your whistleblowers! That said, sometimes it cannot be helped because the whistleblower is also a witness. In any case, investigators should strive not to reveal the identity of witnesses. While an investigator cannot promise confidentiality, they can assure a victim or whistleblower that they will keep the matter as private as possible.

When writing investigative reports, people tend to procrastinate because the stakes are high, and there is pressure to get it right. Johnson says you must (A) think through the message you want to convey clearly before writing, and (B) keep the end-product as concise as possible. So how do you get from A to B? Follow his six steps of the writing process:

If writer’s block remains an issue, Johnson offers some additional, concrete tips to breaking through the mental barrier:

Michael Johnson is a former U.S. Department of Justice attorney and Clear Law Institute CEO, who has provided investigations training for dozens of Fortune 500 companies and organizations such as the Equal Employment Opportunity Commission, the United Nations, and the World Bank. His investigations training has been featured in articles in the Wall Street Journal and The New Yorker. He is graduate of Duke University and Harvard Law School. He grew up on a sweet potato farm in North Carolina.