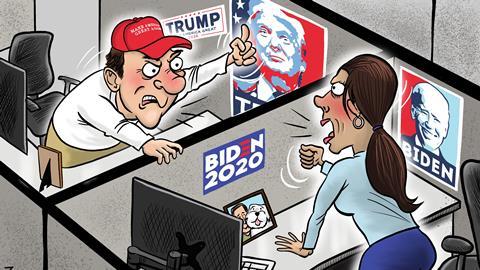 The lead up to the 2020 U.S. presidential election showed the potential for workplace disagreements over politics. The topic of the election led to over one-third of American workers either avoiding speaking to or working with a coworker, according to a survey by Gartner, and 44 percent of HR professionals reported intensified political volatility in the workplace (compared to 26 percent in 2016), a poll by the Society for Human Resource Management found.

The cost for healthy workplace cultures? Politics has always been an issue ripe for contention, but in the past two elections, divisions have become more extreme, less civil, and have negatively impacted working relationships—which ultimately affects an organization’s culture and productivity.

In addition to political tensions leading to significant disagreement and the disruption of positive working relationships, these discussions have a higher-than-average risk of resulting in comments regarding race, national origin, sex, age, religion, or other protected classes. This type of discourse can be (perceived as) discriminatory or hostile toward a group of people, creating an unsafe environment. With current government and social concerns on issues such as immigration, healthcare, gender equity, and race, which all cross into the HR realm, such conversations can lead to harassment and discrimination complaints—especially when a manager is involved.

To help manage these issues, many companies have policies on political expression in the workplace (First Amendment free speech protections do not apply in the workplace). There are protections, notably those afforded by the National Labor Relations Board, related to the freedom to discuss working conditions, pay, promotions, and the right to organize. Some state laws provide additional protection, such as for political activities during non-working hours. However, employers have discretion to limit and regulate political speech in the workplace. This includes banning posters, political buttons, and other workplace images.

It’s not realistic to outright ban talk of politics with coworkers. You can’t tell people what to think, but you can regulate how they behave in certain circumstances.

Political speech in the workplace can overlap with other employee handbook policies and standards, such as: diversity and inclusion, harassment and bullying, discrimination and retaliation, non-solicitation, dress code, workspace decorations, use of company equipment and technology, and the like.

Google recently came out with a policy stating the following: “While sharing information and ideas with colleagues helps build community, disrupting the workday to have a raging debate over politics or the latest news story does not. Our primary responsibility is to do the work we’ve each been hired to do, not to spend time working time on debates about non-work topics.”

Gwen Romack, former compliance director at Hewlett-Packard and VMWare and now president of Off Leash Consulting, advises clients to provide social media guidelines for their executives. Have a “quick check” process with a small group of executives, including the head of HR and PR, “before something that is controversial is posted,” she recommends.

What about individual employees? Of course it’s not realistic to outright ban talk of politics with coworkers. You can’t tell people what to think, but you can regulate how they behave in certain circumstances.

Kim Yapchai, chief ethics and compliance officer at Tenneco, shares that while her company does not have a specific policy, they discuss it with regard to inclusion and diversity and treating each other with respect. “Discussion of differing points of view is healthy when it’s done respectfully and can frankly lead to ideas that neither side thought of when they began,” she says.

Some companies are better than others at navigating these issues and handling productive conflict in the workplace. In a 2017 survey conducted by the American Psychological Association following the 2016 U.S. presidential election, 40 percent of full-time and part-time working Americans said the heated political environment had resulted in at least one negative outcome, such as poor work quality, lower productivity, or a negative view of fellow employees.

“I’ve seen some very heated employees do and say some unwise things in the last few years,” shares Romack. “Our emotions and anxieties can get the better of us.” In many situations, colleagues would be wise to stop and consider the potential upsides and downsides of having political discussions with their coworkers. Given that most of the country was recently divided entirely along party lines, many people are feeling threatened not just on their choice of candidates but their deeply held value systems. What looks logical to one person can quickly devolve into deep conflict.

Take the recent controversy over the firing of popular star Gina Carano of “The Mandalorian” Star Wars franchise for her recent tweets and public commentary (Carano recently implied on social media that being a Republican today was like being Jewish during the Holocaust).

Tips on how to promote a healthy workplace culture

Advice to employees: Weigh the consequences. Think about your intent in starting a political discussion. If you can keep it friendly and lighthearted, you’re probably fine. But remember, it’s unlikely you are going to convince a colleague to change their political views in one short conversation. So—if you’re going to bring it up, are you truly open to a two-way conversation? Is anyone else present who might not be interested in participating? Be aware that a discussion could provoke a needless conflict. If you’re not genuinely curious, interested in learning, and willing to have a true two-way conversation, your best option may be to keep quiet.

Be prepared to gently exit or call an end to a political discussion. Know when to walk away. If you feel like what started as political chitchat has gotten heated, it’s time to respectfully move on. You can transition with something like, “Gosh look at the time. I really enjoyed connecting with you, but I need to move onto this client deadline.”

If your colleague persists, you may need to draw the line and be more direct. “I think we’re going to have to agree to disagree,” or “This discussion is getting a little heated—can we move on?” Be careful not to cross the line into what someone could see as harassment or insults.

Dr. Mary Gentile, professor at the University of Virginia Darden School of Business and founder of the Giving Voice to Values method, shares:

“Start from the premise that we do not need to agree on everything in order to work together effectively; rather, we need to agree only on the core set of shared values that are universal and required for us to work and live together harmoniously. Normalization—that is, understanding that such differences are a normal and predictable part of our experience—brings down the emotion and allows for more creative approaches to communication. This shift of focus provides a common language and the ability to pursue truly shared goals.”

As compliance professionals, it is imperative to speak and align with HR on this issue. Educate yourself about applicable employee policies and consider asking HR to host (virtual, right now) brown bag luncheons on social media guidelines and respect in the workplace. Ask about any heated interactions that may have come up in the workplace; recent incidents; or complaints/investigations, and educate yourself on how you might reinforce HR communications and training on these concerns. Complaints regarding these issues are usually referred to HR and should be thoroughly investigated. Consider supporting HR with regard to what constitutes discrimination and harassment in the workplace and how to prevent it.

Our views are highly individualized; deeply held; and shaped by our ancestry, national origin, sexual orientation, life experience, and many other factors. Ultimately, it’s incumbent upon each of us to create a culture of mutual respect and consideration.

Amii Barnard-BahnA former Fortune Global 50 executive, Amii Barnard-Bahn has been recognized by Forbes as one of the world’s leading coaches for legal and compliance professionals and their teams.