This was the belief of eBay founder Pierre Omidyar, writes Robert Chesnut in “Intentional Integrity: How Smart Companies Can Lead an Ethical Revolution.” In 1999, Chesnut was employee No. 170 at eBay.

Over the last 20-odd years, the explosive success of tech startups carving out and monetizing the sharing economy shows leveraging peer-to-peer communities is not only economically viable—it’s morality-tested and (largely) approved. Even if money-making is a primary motivator, individuals who participate in the marketplace (by offering up their home for vacation rental, for example) place trust in the righteousness of strangers. The platforms work because people are basically good.

And yet, Chesnut’s book cites research showing 70 percent of people are willing to lie, just a little, and still feel good about themselves. He points to countless examples of organizations, institutions, and one-man empires that have either toppled or been irreparably condemned because of unethical practices: Enron, Theranos, Harvey Weinstein, and more.

How does it add up?

“Integrity, regrettably, is a fragile human attribute even for people who value it,” Chesnut writes. 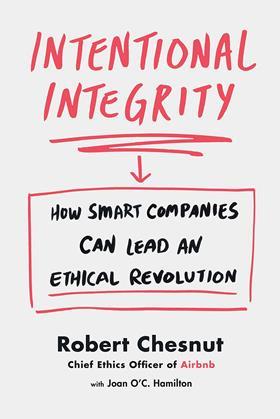 But Chesnut’s book is not just a laundry list of scandals. Rather, he carries out all the postmortems. He provides forensic analyses of what went wrong in each case and, importantly, how organizations and business leaders can prevent it from happening to them.

“I don’t pretend to be a superior judge of personal decisions on what’s right or wrong in the abstract,” he warns. But the man is a former federal prosecutor; general counsel; board member; and advisor to tech companies including Poshmark, Uber, Turo, and Upwork. At Airbnb, he served as chief ethics officer. He has seen—and sorted out—more than his fair share of ethical dilemmas for disruptive business platforms.

Chesnut imparts the benefit of his wisdom. Each chapter is punctuated with a total of 16 “Code Moments”: realistic and all-too-relatable workplace scenarios based on his professional experiences with integrity dilemmas. The book’s appendix unpacks each scenario and offers various action steps (some advisable, others not).

If you think you are a person with integrity, I urge you to take on one of these code moments. Put on your “ethics goggles,” as Chesnut says, and see if you can untangle the thorny situation. Perhaps like me, you might find the conundrums are a lot more complex and challenging than you anticipated, as competing virtues and values obscure the proper course of action.

What resonated most with this reader was something Chesnut called the “integrity trap,” wherein a person believes a decision has integrity because he/she assumes integrity informed the decision. It sounds like a riddle, but what it means is the person is beginning with an assumption that what he/she is trying to prove is already true. This circular reasoning rationalizes away red flags.

Thus, for organizations to avoid the integrity trap at scale and mitigate the risks associated with ill-founded decision-making, Chesnut proposes a methodology for infusing and driving integrity into every corner and level of a company. He calls it the “Six C’s”: Chief (i.e., setting tone at the top); Customized Code of Ethics; Communicating the Code; Clear Reporting System; Consequences; and Constant (i.e., ongoing monitoring). He devotes chapters to each step, including research-backed statistics about human behavior and cross-industry workplace incidents; positive examples in the media; cautionary tales; and company rules he’s found effective.

For example, no one on the executive team at Airbnb is allowed to pursue a romantic relationship with another Airbnb employee. Period. To some, this might sound controversial, even tyrannical. Chesnut believes leaders must draw hard lines in the sand to prevent problems before they start.

Correspondingly, consequences need to be enforced when ethical violations occur—regardless of rank or perceived value. “No company should have a provision in its code that it’s not prepared to enforce against its most valuable employee,” writes Chesnut. It isn’t about ruling with an iron fist. It’s about being proactive, recognizing where ethical dilemmas could occur down the line. Thus, he’s also an advocate for personal behavior clauses in employment contracts and board agreements.

In a similar vein, companies need to be firm about living out their values with their communities at large and engaging in broader community issues. That means making judgment calls about what kinds of customers the business should and should not serve. If a certain user’s values are inconsistent with the company’s, the relationship should be cut off.

A nice example of a leader who willingly sacrificed revenue and braced for blowback for the sake of standing up for the company’s values was former Dick’s Sporting Goods CEO Edward Stack. In light of the school shootings epidemic plaguing our nation, the retailer took assault-style rifles and high-capacity ammunition off its shelves. Did it impact the company’s bottom line? Yes. Was every Second Amendment-loving consumer happy about it? No. Did the company stand by the decision? Yes.

This is where the key word intentional comes into play in Chesnut’s integrity curriculum. Ambiguity is the enemy of integrity, Chesnut points out. Companies cannot hesitate over ethical dilemmas, pleading complexity. Without conviction, integrity ceases to exist.

“As a company’s leader, you either embrace integrity or wait for the day when the world will force you there,” Chesnut prophecies.