“If they don’t give you a seat at the table, bring a folding chair.” 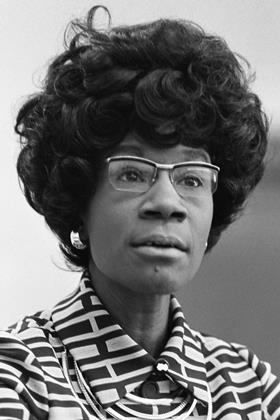 Shirley Chisholm brought her folding chair with her as an educator, New York State Assembly member, and the first Black congresswoman in 1969. She served seven terms in the House of Representatives, representing the 12th district in New York.

She didn’t let anyone dictate who she was or get in the way of the causes she championed.

One of Chisholm’s early activities in the state assembly was to argue against New York’s literacy test, which required understanding English. She stated that just because a person “functions better in his native language is no sign a person is illiterate.”

While in office, Chisholm fought for the same issues she had been passionate about her whole life: children’s education and welfare, a guaranteed minimum income to help the poor, the expansion of nutrition programs for the poor, immigration rights, and women’s rights.

Maybe you’ll enjoy this image as much as I do: When first running for Congress, Chisholm traveled her Brooklyn district in a sound truck that pulled up outside housing projects as she announced, “Ladies and gentlemen … this is fighting Shirley Chisholm coming through.”

It perfectly epitomized her 1968 campaign slogan: “Unbought and unbossed.”

Chisholm was indeed “unbossed”; many of her colleagues in Congress were taken aback when she chose to visit Alabama Governor George Wallace, an avowed opponent of desegregation, after he had been shot during a campaign stop in 1972. At the time of the assassination attempt, Chisholm and Wallace both were seeking the Democratic nomination for president.

Chisholm defended her decision to visit Wallace, noting all the other presidential candidates did the same. She told Wallace, “I wouldn’t want what happened to you to happen to anyone.”

Those words seem uncharacteristically charitable for a politician, given the heated Capitol Hill rhetoric that helps fan the palpable flames of divisiveness today.

We’d do well with more people of Chisholm’s character in positions of power. On Martin Luther King Jr. Day, it bears mentioning some history is worth repeating.

Julie DiMauroJulie DiMauro is CW's Director of Training & Data. She joined Compliance Week in 2020 after spending 10 years at Thomson Reuters as a subject matter expert in its risk and compliance department.