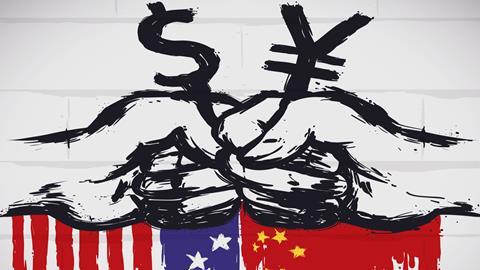 How industries are responding to the escalating U.S.-China trade war

While the escalating tit-for-tat trade war and increasing tariff rate hikes between the United States and China cannot be controlled, proactive companies are learning to swing with the punches—from diversifying their supply chains to shifting their production lines elsewhere.

Concerns among business leaders rose to a whole new level on Aug. 23, when the United States Trade Representative (USTR), at the direction of President Donald Trump, announced it would be increasing by an additional 5 percent the tariffs on approximately $550 billion worth of goods imported from China. For the current 25 percent tariff on approximately $250 billion worth of imports from China (List 1, List 2, and List 3), USTR will increase the tariff rate to 30 percent on Oct. 1.

For the 10 percent tariff on approximately $300 billion worth of imports from China that President Trump announced in early August (List 4) under Section 301, the tariff will be increased to 15 percent. The first round of tariff increases on many of these products (List 4A) took effect Sept. 1, with the remainder to take effect Dec. 15 (List 4B).

The combined List 4 covers essentially all products not already subject to Section 301 tariffs. Such goods include all footwear, apparel, and manufactured textile products, consumer electronics, and many other everyday consumer products, among others. Thus, companies should carefully review List 4 to determine whether it impacts them and whether to apply for an exclusion from the tariffs.

According to the American Apparel & Footwear Association (AAFA), the additional 15 percent tariff on List 4 products that took effect Sept. 1 affects 77 percent of all apparel, footwear, and home-textile products imported to the United States from China, amounting to approximately $39 billion worth of goods. And 23 percent of these same products that will be hit with the tariff on Dec. 15 amounts to approximately $12 billion worth of goods.

“The President has said he wants American businesses to stop working in China, [and] yet he doesn’t seem to understand that moving a supply chain is incredibly complicated and expensive,” said AAFA President and CEO Rick Helfenbein, who will step down at the end of the year. “It takes years to build relationships that meet compliance standards and deliver quality products.”

On Aug. 28, Americans for Free Trade, a coalition of 164 business groups representing numerous industries, sent a joint letter to President Trump urging him to cancel the tariff hikes, stressing the cost implications. “Because many of our industrial inputs are still sourced in China, these new tariffs will act as a tax on U.S. manufacturers and U.S. farmers, whose costs will now increase,” the letter stated. “And because these tariffs were announced with little warning, it is impossible for U.S. importers to share the burden with supply-chain partners in China or shift their production to other countries.”

The U.S. tariff hikes come in response to an announcement by the Customs Tariff Commission of China’s State Council that it would be imposing $75 billion in additional tariffs on certain U.S. products imported into China in retaliation for the List 4 tariffs. As with the U.S. tariffs, China’s tariffs come in two waves. Effective as of Sept. 1, additional tariffs of 5 or 10 percent will be imposed on approximately 5,000 U.S. products, while a tariff of 25 percent on imports of U.S.-made autos and auto parts will be reimposed starting Dec. 15.

According to two recent surveys, the U.S.-China trade war at a high level has raised costs, resulted in lost sales, and hindered many companies’ operations in China. In one survey, conducted by the American Chamber of Commerce in China (AmCham China), 75 percent of 250 member companies said the increases in U.S. and Chinese tariffs are negatively impacting their businesses. They cited as their top three concerns decreased demand for products (52 percent), higher manufacturing costs (42 percent), and higher sales prices for products (38 percent).

When asked how tariffs are impacting their business strategies directly, 35 percent of respondents in the AmCham China survey said they’re adopting an “In China, for China” strategy by localizing manufacturing and sourcing within China to mainly serve the China market, while 33 percent said they are delaying or canceling investment decisions. Others said they are adjusting their supply chain by seeking to source components and/or assembly outside the United States (25 percent) or outside of China (23 percent).

Both surveys also point to increased scrutiny by Chinese regulators as a result of the tariffs. In the USCBC survey, 33 percent reported being subject to increased scrutiny from Chinese regulators. In the AmCham China survey, 20 percent of respondents said they’ve experienced increased inspections or slower customs clearance, while 14 percent reported experiencing slower approval for licenses or other applications.

Despite the President’s urging to cease operations in China, many U.S. companies indicated they have no plans to do so. In the AmCham China survey, for example, 60 percent said they have no plans to relocate manufacturing facilities. In the USCBC survey, 87 percent of companies said they, too, have no intention to pull out of China, and a further 66 percent of firms said they were optimistic about their business prospects in the country.

Nike is a prime example. “We are and remain a brand of China and for China,” Nike CEO Mark Parker said in a June 27 earnings call. “Nike is proud of the investments we’ve made and the relationships we’ve developed in energizing this marketplace. We’re confident that we will continue to grow sport and our business in China for decades to come.”

Apple is another example of a company inextricably tied to China, and so it’s little surprise that when asked in a July 30 earnings call whether the company was looking at or considering potential alternatives in moving parts of its production out of China, CEO Tim Cook basically dismissed the idea. “I know there’s been a lot of speculation around the topic of different moves and so forth. I wouldn’t put a lot of stock into those,” he said. “The way that I view this is the vast majority of our products are kind of made everywhere. There is a significant level of content in the United States and a lot from Japan to Korea to China, and the European Union also contributes a fair amount. That’s the nature of a global supply chain.”

In numerous other earnings calls over the last two months, however, other executives have said they are, in fact, looking to diversify their supply chains. “As we reach scale with key vendors, we will have stronger partnerships, a greater control over product quality, and the ability to achieve better terms and lower cost. We also continue on a fast track to reduce our exposure in China,” Bonnie Brooks, CEO of retail company Chico’s, said in an Aug. 28 earnings call.

On a broader scale, according to the AmCham China survey, among those who said they’re moving manufacturing out of China, the top three regions mentioned were Southeast Asia (24.7 percent), Mexico (10.5 percent), and the Indian Subcontinent of India, Bangladesh, Pakistan, and Sri Lanka (8.4 percent).

At Chico’s, for example, Brooks said that, “Over the next 18 months, we anticipate we will be in the low 30 percent range compared to our current penetration of approximately 40 percent as we shift more of our sourcing to Vietnam, Indonesia, and India.”

Significant shifts are happening within global supply chains, as well. “I would say, on the margin, I’m not aware of a single supplier who is not moving some form of manufacturing outside of China,” Ted Decker, executive vice president of merchandising at Home Depot, said in an Aug. 20 earnings call. “We have suppliers moving production to Taiwan, to Vietnam, to Thailand, Indonesia, and even back into the United States.”

Other companies are taking a middle-of-the-road approach. Toy company Hasbro, for example, is increasingly spreading its footprint and adding new geographies for production globally. “That includes new production in India and Vietnam,” Brian Goldner, vice president of investor relations, said in a July 23 earnings call. “Having said all that, we also want to reaffirm that China continues to be a high-quality, low-cost place to make toys and games, and it will continue to be part of our global network in a major way.”

As the trade war continues, companies that are thinking proactively generally practice the following risk mitigation strategies: Maintain ongoing communication with suppliers; gather relevant trade data from both internal and government sources to assess trade activity and potential duties costs; map import activity; consider where adjustments can be made in the supply chain; and reevaluate current product-pricing strategies.