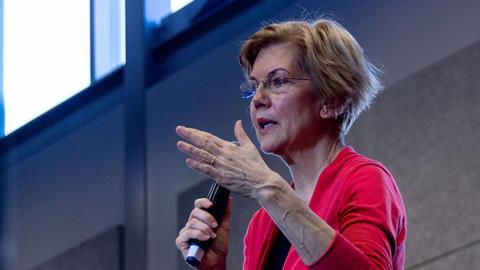 Warren, a candidate for president, also reintroduced the Ending Too Big to Jail Act, a bill seeking to hold big bank executives accountable when the banks they lead break the law.

“Corporations don’t make decisions, people do, but for far too long, CEOs of giant corporations that break the law have been able to walk away, while consumers who are harmed are left picking up the pieces,” she said in a statement. “These two bills would force executives to responsibly manage their companies, knowing that if they cheat their customers or crash the economy, they could go to jail.”

Executives at large corporations often escape prosecution because it is hard to demonstrate that they are personally aware of all their company’s actions, Warren explained. Some federal laws, however, including the Food, Drug, and Cosmetic Act and the Clean Air Act, already impose criminal liability on corporate leaders when a company’s negligence causes massive harm, regardless of whether they personally approved actions that broke the law.

The Corporate Executive Accountability Act, Warren said, builds on these existing federal statues “and makes it easier to send executives to jail for serious crimes by expanding criminal liability to negligent executives of corporations with more than $1 billion in annual revenue” that:

Punishment for such a violation under Warren’s proposed legislation would be up to a year in jail, while a second violation would carry up to three years in jail, consistent with the Food, Drug and Cosmetic Act.

The Ending Too Big to Jail Act also seeks to make it easier to hold financial executives accountable by:

The Ending Too Big to Jail Act, first introduced by Warren in March 2018, has been endorsed by Public Citizen, Americans for Financial Reform, Take On Wall Street, and the Communications Workers of America, among others.