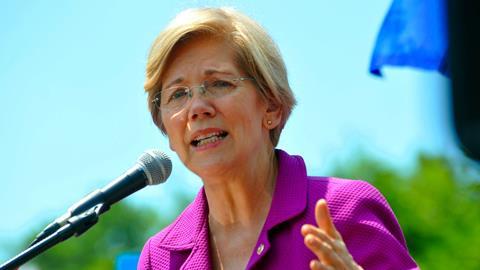 It was only a matter of time, given recent scrutiny of Big Tech data practices, that someone among the growing field of Democrat presidential candidates would formalize the cause. The winner: Sen. Elizabeth Warren (D-Mass.)

“Twenty-five years ago, Facebook, Google, and Amazon didn’t exist. Now they are among the most valuable and well-known companies in the world. It’s a great story—but also one that highlights why the government must break up monopolies and promote competitive markets,” Warren wrote.

Today’s Big Tech companies have too much powerover “our economy, our society, and our democracy,” she argued. “They’ve bulldozed competition, used our private information for profit, and tilted the playing field against everyone else. And in the process, they have hurt small businesses and stifled innovation.

“I want a government that makes sure everybody—even the biggest and most powerful companies in America—plays by the rules. I want to make sure that the next generation of great American tech companies can flourish. To do that, we need to stop this generation of Big Tech companies from throwing around their political power to shape the rules in their favor and throwing around their economic power to snuff out or buy up every potential competitor.”

Warren made her case of how a handful of companies gained global dominance: Nearly half of all e-commerce goes through Amazon; and more than 70 percent of all Internet traffic goes through sites owned or operated by Google or Facebook. These companies, she alleged, have used mergers to limit competition. Facebook purchased competitors Instagram and WhatsApp. Amazon used its market power to force smaller competitors like Diapers.com to sell at a discounted rate. Google purchased rival mapping company Waze and rival ad company DoubleClick.

Amazon, she added, “crushes small companies by copying the goods they sell on the Amazon Marketplace and then selling its own branded version” and Google allegedly “snuffed out a competing small search engine by demoting its content on its search algorithm, and it has favored its own restaurant ratings over those of Yelp.”

The problem, and attempted resolutions, date back to antitrust concerns with Microsoft in the 1990s. The federal government sued Microsoft for violating anti-monopoly laws by bundling its Internet Explorer with its Windows operating system. “The government’s antitrust case against Microsoft helped clear a path for Internet companies like Google and Facebook to emerge,” Warren claimed.

“The story demonstrates why promoting competition is so important: It allows new, groundbreaking companies to grow and thrive—which pushes everyone in the marketplace to offer better products and services,” she said. “Aren’t we all glad that now we have the option of using Google instead of being stuck with Bing?”

Even further back in history, a century ago in the so-called Gilded Age, “waves of mergers led to the creation of some of the biggest companies in American history—from Standard Oil and JPMorgan to the railroads and AT&T,” Warren explains. “In response to the rise of these ‘trusts,’ Republican and Democratic reformers pushed for antitrust laws to break up these conglomerations of power to ensure competition.”

“The proposal ignores the fact that many of the services Big Tech companies now provide free used to cost consumers money. Breaking up large Internet companies just because they are large won’t help consumers. It will hurt them by reducing convenience, reducing quality of service and innovation, and in some cases leading to the introduction of priced services.”

In Warren’s analysis, weak antitrust enforcement has led to a dramatic reduction in competition and innovation in the tech sector. “Venture capitalists are now hesitant to fund new startups to compete with these Big Tech companies, because it’s so easy for the big companies to either snap up growing competitors or drive them out of business,” she said, adding first financing rounds for tech startups have declined 22 percent since 2012.

“America has a long tradition of breaking up companies when they have become too big and dominant—even if they are generally providing good service at a reasonable price,” Warren argued. “But where the value of the company came from its network, reformers recognized that ownership of a network and participating on the network caused a conflict of interest. Instead of nationalizing these industries—as other countries did—Americans in the Progressive Era decided to ensure that these networks would not abuse their power by charging higher prices, offering worse quality, reducing innovation, and favoring some over others. We required a structural separation between the network and other businesses and also demanded that the network offer fair and non-discriminatory service.”

If elected, Warren’s administration would restore competition to the tech sector by taking two major initiatives:

Legislation would require that large tech platforms be designated as “Platform Utilities” and broken apart.

Companies with an annual global revenue of $25 billion or more and that offer to the public an online marketplace, an exchange, or a platform for connecting third parties would be designated as “platform utilities,” Warren explains.

For smaller companies (those with annual global revenue of between $90 million and $25 billion), their platform utilities would be required to meet the “same standard of fair, reasonable, and non-discriminatory dealing with users, but would not be required to structurally separate from any participant on the platform.”

The blog continues: “To enforce these new requirements, federal regulators, state attorneys general, or injured private parties would have the right to sue a platform utility to enjoin any conduct that violates these requirements, to disgorge any ill-gotten gains, and to be paid for losses and damages. A company found to violate these requirements would also have to pay a fine of 5 percent of annual revenue.”

Examples, she said, are Amazon (Whole Foods, Zappos); Facebook (WhatsApp, Instagram); and Google (Waze, Nest, DoubleClick). Apple was not on the original list, but Warren later confirmed that it also was a concern.

What would the Internet look like after all these reforms?

What will change: “Small businesses would have a fair shot to sell their products on Amazon without the fear of Amazon pushing them out of business. Google couldn’t smother competitors by demoting their products on Google Search. Facebook would face real pressure from Instagram and WhatsApp to improve the user experience and protect our privacy. Tech entrepreneurs would have a fighting chance to compete against the tech giants.”

Warren conceded that her proposals “won’t solve every problem we have with our Big Tech companies.”

“We must give people more control over how their personal information is collected, shared, and sold—and do it in a way that doesn’t lock in massive competitive advantages for the companies that already have a ton of our data,” she said. “We must help America’s content creators—from local newspapers and national magazines to comedians and musicians—keep more of the value their content generates, rather than seeing it scooped up by companies like Google and Facebook. And we must ensure that Russia—or any other foreign power—can’t use Facebook or any other form of social media to influence our elections.”

“More competition means more options for consumers and content creators, and more pressure on companies like Facebook to address the glaring problems with their businesses,” she added.

The Information Technology and Innovation Foundation, billed as the world’s leading think tank for science and technology policy, said the Warren campaign’s call to break up Big Tech companies reflects a “big is bad, small is beautiful ideology run amok.”

“The proposal ignores the fact that many of the services Big Tech companies now provide free used to cost consumers money,” said ITIF President Rob Atkinson. “Breaking up large Internet companies just because they are large won’t help consumers. It will hurt them by reducing convenience, reducing quality of service and innovation, and in some cases leading to the introduction of priced services.Consumers now benefit greatly from having one Amazon, one Google, and one Facebook. The goal of competition policy should be to enhance consumer welfare, not penalize companies for earning market share and operating at scale—yet that is exactly what the Warren proposal would do.”

To the extent that Warren is concerned about important issues like privacy, political power, or Russian interference, “the answer is not to break up tech companies but to pass a national privacy framework, campaign finance reform legislation, and laws regarding political ads,” he added.