2
Tariffs on/tariffs off: a compliance nightmare 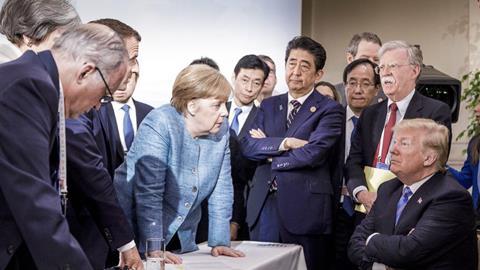 Tariffs on/tariffs off: a compliance nightmare

“I have steel on the water on the way to the United States at the moment. How do I invoice my customer with a 20 percent tariff? How do we cope with the VAT [value added tax] on that?”

This is just one example of the problems facing compliance officers following the announcement of U.S. Section 232 tariffs, according to U.K. Steel Director Gareth Stace. “Even the top U.S. trade lawyers had no definite answers to any of the questions that manufacturers asked,” he said. “And the last time this happened was in 2002, so much of that historical knowledge for compliance has gone.”

In this world of on-again, off-again sanctions and tariffs, dealing with compliance issues under the current U.S. administration has become not just a nightmare for compliance officers in the United States, but also for those in the United Kingdom, Europe, Canada, and Mexico. The latest tariffs on steel and aluminum for the European Union, which still includes the United Kingdom, makes complying with trade rules extremely challenging. It’s not just tariffs on exports; if you are an importer, and European officials activate their threats to retaliate against U.S. products, including orange juice, peanut butter, jeans, motorcycles, and bourbon, then suddenly your planned imports are contraband.

And it could get more challenging if there is a tit-for-tat trade war, as seems likely, despite conciliations like the one that came from the Confederation of British Industry’s (CBI) International Director, Ben Digby, who said, “… this is a shared challenge whose root causes should be tackled jointly by the EU and the USA. … Now is not the time for any disproportionate escalation, and we urge the EU to consider this when initiating its response.” Most other responses were less conciliatory. France’s president Emmanuel Macron called Trump’s move illegal and added: “Economic nationalism leads to war. That is exactly what happened in the 1930s.”

The European Union has initiated a dispute settlement case at the World Trade Organisation (WTO) in response to the claims of illegality. EU Trade Commissioner Cecilia Malmström said, “This is not the way we do business and certainly not between longstanding partners, friends, and allies.”

“This is a bad day for the steel sector, for international relations and for free trade.”

The political reaction is typically different from the industry one. Neither British Steel, nor the huge Indian steel manufacturer, Tata, which owns many steel works in the United Kingdom, would field anyone to talk about the issues. But reactions from industry trade groups have been as forthright as the politicians. U.K. Steel’s Stace said, “President Trump had already loaded the gun and, today, we now know that the U.S. Administration has unfortunately fired it and potentially started a damaging trade war.” Stace warned that the damage will not only be to the U.K. steel sector, but also the U.S. economy. “Any U.S. calls for the EU to voluntarily place hard limits on its exports of steel were completely unjustified, against WTO rules and run counter to central tenets of free-trade,” he said.

Stace predicted supply chain disruption and warned that with some half billion dollars of steel exported from the United Kingdom to the United States last year, U.K. steel producers are going to be hit hard. He added, “The only sustainable solution to the root cause of the issue, global overcapacity in steel production, is multilateral discussions and action through established international channels.” Like the CBI, Stace said the two economic blocs must continue discussions, but unlike the CBI he felt it correct to forge “ahead with safeguard action, to shield against diverted trade swamping the European market.”

“We are deeply disappointed that the United States has taken this unjustified decision, particularly on grounds of national security.”

International Trade Secretary for the U.K. Liam Fox said, “We share a strong defence and security cooperation relationship. These unilateral trade measures have weak foundations indeed in international law and they are not consistent with the U.S. Department of Defense’s own judgement in an investigation that was conducted on the basis of national security.” He added that the U.K. is still seeking tariff exemptions based both on specific products and also geographic location and that Prime Minister Theresa May would be disputing the tariffs with President Trump.

For compliance officers, the level of uncertainty is extreme, because of both the tariffs themselves and the prospect of them being lifted, reapplied, weakened, and exempted. Fox added that the United Kingdom exports complex steel products to the United States, part of their national security programmes themselves, and argued that this undermines the national security argument used as a basis for the tariffs in the first place. So, the prospect of product exemptions and/or lifting of the tariffs is a real one. Stace added, “Whilst tariffs have come into force, this is far from an end to the conversation.” He also said that steel companies would be grateful for the government’s help in seeking to attain product exemptions from tariffs and for helping to have such applications expedited by the U.S. Department of Commerce. While these negotiations could be good for the economy, they only serve to add to the complexity of compliance officers’ ability to help their employers stay within the law.

“The President’s measures are deeply concerning for firms in the UK, for close trading partners and across supply chains. Now is not the time for any disproportionate escalation, and we urge the EU to consider this when initiating its response.”

“There are something like 12,000 product exemption applications with the Commerce Department at the moment,” said Stace. “And that’s just steel. Maybe another three or four thousand for aluminium.” Stace added that the Department of Commerce is understaffed and does not have the resources to make rapid judgments on these exemptions. “You might find your application rise to the top of the pile in a few months; but if there is a mistake, it will be rejected out of hand and you have to start again. Also bear in mind that exemptions only last a year, so it will all have to be done again in 12 months.”

The exemption applications must be submitted by U.S. customers of EU firms and must include very specific, commercially confidential information, even though these are publicly available documents. This can be redacted, but there is no guarantee that it will be. Many manufacturers commented that this would be like Coca-Cola disclosing the recipe for Coke. Stace shared an exemption application from Universal Bearings that provides enough proprietary information for a U.S. company to take the information and reproduce the particular grade of steel that is currently only available via import from the United States. Domestic steel producers in the United States can object to product exemption applications in a 30-day window after they are initially approved, and this can delay full approval by another 90 days, leading to further uncertainty. “As of last week, no applications have been approved.”

The CBI’s Digby said that the U.K. is the largest foreign investor in America, with British companies supporting more than 1 million jobs in the United States. “Overproduction can distort the global market,” he continued, “and erode the level playing field that business depends on to stay competitive. But this is a shared challenge whose root causes should be tackled jointly by the EU and the USA. There are no winners in a trade war, which will damage prosperity on both sides of the Atlantic. These tariffs could lead to a protectionist domino effect, damaging firms, employees, and consumers in the USA, U.K., and many other trading partners.”