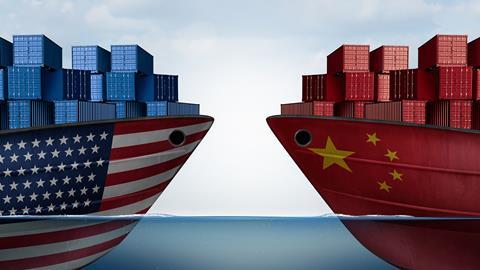 The tit-for-tat trade war between the United States and China has placed a number of industries in a tight spot, having to figure out how to navigate in an ever-changing, unstable landscape.

Concerns among business leaders have mounted following a memorandum President Trump issued March 22 authorizing the United States Trade Representative (USTR) to investigate and act against China’s “unfair and harmful acquisition of U.S. technology.” That memorandum, among other measures, directed that the USTR propose additional tariffs on a wide range of Chinese products.

Targeted sectors include aerospace, information communication technology, and machinery. On a broader scale, nearly all industries will feel the impact—oil and gas, iron and steel, medical devices, life sciences, retail, agriculture, consumer goods, and many more.

The USTR on June 15 published a final list of products consisting of two sets of U.S tariff lines:  The first set contains 818 lines of the original 1,333 lines that were included on the proposed list published in April that will be subject to an additional 25 percent tariff.

This final list removes 515 product lines from the initial proposed list and covers approximately $34 billion worth of imports from China.  U.S. Customs and Border Protection will begin collecting the additional duties on July 6.

The second set contains 284 proposed new tariff lines identified by the interagency Section 301 Committee as benefiting from Chinese industrial policies.  These 284 lines, which cover approximately $16 billion worth of imports from China, will undergo further review in a public notice and comment process, including a public hearing.  After completion of this process, USTR will issue a final determination on the products from this list that would be subject to the additional duties.

With President Trump’s plans to impose tariffs of 25 percent on steel and 10 percent on aluminum under the Section 232 action, many companies will potentially be subject to dual tariffs, as high as a 50 percent total additional duty rate.

For companies both large and small that critically depend on access to China, the cost alone could be a death sentence. “The tariff proposed by President Trump would cripple my business and many like it in the Midwest,” Mary Buchzeiger, CEO of global automotive supplier Lucerne International, said in testimony before the USTR. “I’m fighting for the life of my company and the livelihood of my employees, and I’m fighting to protect an intricate auto supply chain that creates hundreds of thousands of U.S. jobs.”

Buchzeiger summed up the sentiment expressed by many of the more than 100 executives, trade groups, and industry representatives who showed up to debate the impending Section 301 tariffs during a three-day public hearing in May. In their testimony, opponents of the tariffs argued that the hit to their bottom line would be so detrimental that it would result in a significant reduction—if not a total halt—in manufacturing operations, a reduction in workforce, cost hikes to customers, and ultimately would give foreign competitors an advantage in the global marketplace.

Automotive air conditioning manufacturer Sanden International USA, for example, is just one of many companies in the United States that operates in a Foreign Trade Zone (FTZ)—the U.S. version of a free-trade zone. Implementation of the tariffs without any sort of modification to the product list “will significantly impact the cost of manufacturing at Sanden,” said George Tuttle, a lawyer that testified on behalf of Sanden. “We estimate an additional $3.5 million in duty payments per year will be required for the affected components that we currently import from China.”

“To switch production to the domestic industry, it takes approximately four to five years to bring on a new supplier,” Tuttle said. Not having the benefit of being able to use certain Chinese parts in the FTZ is “going to have a severe and immediate impact on the ability of Sanden to produce and sell its products.”

For many companies, U.S. manufacturing shortcomings are a real concern. “Our members report that a number of products included in the tariff list cannot be sourced in the United States as there are no U.S.-based factories producing some of these products,” said Aaron Lowe, senior vice president for regulatory and government affairs for the Auto Care Association (ACA). “At the same time, minimal alternative sources exist, as China is the primary supplier to the world.”

“Companies that have not considered what it would mean to restructure or adjust capacities or things like that, they should be thinking about that now. They should be running those scenarios.”

Many at the three-day public hearing asked the Trump administration to exclude certain components from the list, arguing that imposing tariffs on them would have no meaningful effect on China, and would only harm the U.S. economy. “For some specialized industrial parts, alternative suppliers outside China are simply not readily available due to global capacity constraints, rigorous quality control, and compliance requirements for suppliers of critical infrastructure equipment, or, in some instances, the need for U.S. regulatory approvals,” said Karan Bhatia, senior counsel of global government affairs and policy for General Electric.

The sentiment expressed by a number of companies across many industries was clear: Sourcing new suppliers, renegotiating contracts, and moving physical equipment to new locations could take years—and the costs would be devastatingly astronomical.

Still, there were many others who urged the Trump administration to add products to the list in the name of protecting intellectual property. Without tariff protections, “we still run the risk of the very problem that faces us today, which is Chinese companies taking our intellectual property, copying it and then selling it to some of our own customers,” said Cory Watkins, president of automotive-related products manufacturer Schumacher Electric. Watkins cited an example in which Schumacher just recently learned that one of its largest customers signed a contract with a Chinese manufacturer that Schumacher had served with a lawsuit for stealing its intellectual property.

Additionally, several trade groups representing the textile and apparel industry requested in a written statement that textile and apparel end products be subject to additional tariffs. “China’s domination of global textile markets has clearly been aided by its rampant theft of U.S. textile intellectual property,” Auggie Tantillo, CEO of the National Council of Textile Organizations, said in his testimony. “Putting 301 tariffs on Chinese textile and apparel exports would send a long overdue signal that these predatory actions will no longer be tolerated.”

What the implications of the final tariffs mean from a compliance standpoint is that companies that historically imported many of the items on the Section 301 list must for the first time ever consider a trade compliance strategy, given that most of the products on the list are no longer duty-free.

Moving forward in this uncertain new trade environment, “there are steps companies can take to mitigate some of those uncertainties,” says George Zaharatos, principal in the trade & customs practice of KPMG. “It’s really important for companies to establish a compliance program that addresses import and export compliance, and that should include people, process, and technology.”

Put together a cross-functional team specifically to address the new tariffs. Think carefully about who needs a seat at that table—such as members of the C-suite, trade compliance, risk, supply chain, procurement, finance and tax, logistics, research and development. What potential risks, costs, and operational disruptions needs to be discussed? What next steps need to be considered?

Gather trade data. Gather all relevant trade data from both internal and government sources to begin assessing trade activity and potential duties costs. “The first step is to compare import data and the values associated with those covered products and assess what the additional impact will be in terms of duties for future imports,” Zaharatos says. What many companies are doing, for example, is taking their import data—their Harmonized Tariff Schedule classifications—and comparing them to the final tariff list.

“Some people are taking spreadsheets themselves going through the exercise,” says Renee Roe, a director at BPE Global, a global trade compliance consulting firm. For those that don’t want to do this manually, BPE Global offers a free trade calculator that companies can use to determine actual cost impact of tariffs. In this way, senior executives will have a single page outline of what impact trade policies will have based on the company’s actual import data so they can develop a strategic plan moving forward and determine whether items can be sourced elsewhere.

Map import activity. With sufficient data in hand, companies can then take steps to mitigate the impact of potential additional tariffs. One way to do that is to make sure that products are properly being classified for import to begin with. “Classification is the basis for the duty rate, and it’s the fundamental component of any customs compliance program,” Zaharatos says. “Now is the time for companies to review those classifications and determine whether they are classifying them properly.”

A second important compliance consideration is customs valuation, the procedure of determining the customs value of imported goods. Once you know that the correct tariff classifications are being used, and you find that you’re still going to be subject to the Section 301 25 percent additional tariff, it’s important to ensure you have the right reported value on customs entries, that any statutory additions have been included.

Consider cost-savings opportunities. KPMG recommends that trade compliance teams begin assessing whether there are any cost-saving areas of opportunity that they didn’t take advantage of in the past, but that may be a more attractive option now in the new trade landscape. For example, U.S. customs in a 2007 ruling held that, “the amounts for freight, fuel surcharges, and security and handling fees may be excluded from the price actually paid or payable as international shipment or transportation costs, provided the appropriate documentary support exists in any particular case.”

Review supply-chain strategies. New tariffs will require making adjustments to the supply chain and reevaluating current product-pricing strategies. “If you don’t want to be reactive, start looking now at where else you can source from,” Roe says. Most components are not sourced from just one supplier, so it’s a good idea to begin assessing other options, she says.

“Restructuring in China is a very difficult task,” says Kent Kedl, a senior partner, Greater China and North Asia, at consultancy firm Control Risks. “It’s not easy to shut down a factory. Laying people off is incredibly difficult in China; the labor laws very much favor employees. Over the last four to five years, that’s been a challenge. If you add onto that supply-chain disruptions or changing some of their operations because of trade issues, that just adds extra pressure.”

“Companies that have not considered what it would mean to restructure or adjust capacities or things like that, they should be thinking about that now,” Kedl adds. “They should be running those scenarios.”