The Global True Cost of Compliance 2020 report found the biggest increases in compliance costs came in Western Europe, particularly Germany, and in the United States.

The bulk of financial crime compliance spending—$150.6 billion—studied in the survey occurred in the Western European countries of the United Kingdom, France, Germany, the Netherlands, Italy, the Baltic states, Poland, the Czech Republic, and Hungary. The United States and Canada ranked next, at $42 billion. 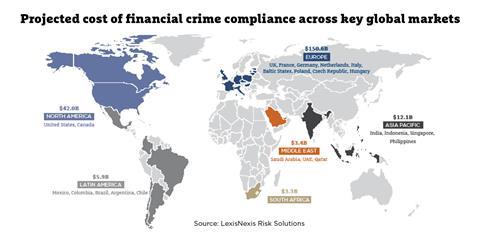 A handful of countries with highly regulated financial systems, including China, Japan, Australia, New Zealand, Spain, Sweden, and Denmark, were not examined in the study. A LexisNexis Risk Solutions spokesman said the survey selected “a sample of countries from each region based on where its business is focused, while trying to ensure the larger financial centers and/or those with high financial crime risks are represented.”

While there was a consensus among respondents that costs are rising across all markets studied, they were not in agreement about the factors driving compliance costs. Customer risk profiling, sanctions screening, regulatory reporting, identifying politically exposed persons (PEPs), KYC for account onboarding, and efficient alerts resolution were all similarly ranked by respondents as key challenges, the survey found.

The pandemic played a role in driving up compliance costs, but its effects were uneven across regions and company sizes. Mid- to large-sized U.S. financial services providers were much more likely to see a dramatic spike in compliance costs partially because of the pandemic, respondents said. Some pandemic-driven costs stemmed from increased alert volumes and suspicious transactions, inefficiencies with alert resolution and due diligence, more manual work, and limitations with proper risk profiling/sanctions screening/PEP identification, the survey said.

In the United States and Canada, the top challenge with financial crime compliance was sanctions screening (65 percent), while in Western Europe, it was customer risk profiling (53 percent). In the Asia Pacific region, which included India, Indonesia, Singapore, and the Philippines, the major challenge was KYC (58 percent).

In Europe, regulators are rolling out money laundering directives on cryptocurrency, money mules, and trafficking. Financial services firms are facing profiling and identification challenges as they attempt to satisfy new regulatory directives.

“Financial institutions should investigate both the physical and digital identity attributes of their customers, leveraging data analytics to assess risks and behaviors in real time,” she said.