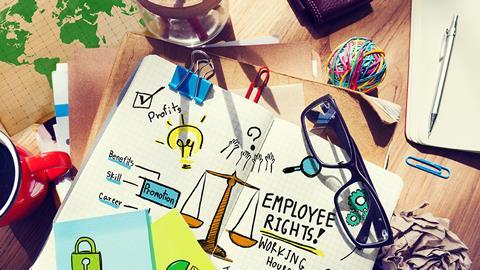 Improving workplace equality is on the list of concerns and priorities for European employers, with many moving to address equal pay and workplace harassment, according to the findings of a newly released European employer survey.

The survey of 572 in-house counsel and human resources professionals, conducted by law firm Littler, found European employers are focusing a great deal of attention on equal pay issues, even more so than last year. Providing female and diverse employees with more training and opportunities for advancement showed the greatest increase (33 percent in 2019, compared to 21 percent in 2018), followed by improving transparency around wages and pay policies (30 percent, up from 21 percent) and modifying compensation policies (32 percent, up from 25 percent).

The proliferation of laws mandating gender pay gap audits in European countries appears to be one driver of this activity. Most respondents (80 percent) identify conducting and reporting on their gender pay gaps as a concern, but the European employers surveyed are also taking actions beyond those required by law.

“In addition to legal liability, employers are worried that pay inequities in their workplaces could negatively impact their reputations, employee satisfaction, and their ability to attract talent,” said Thomas Griebe, a Littler partner in Germany. “Particularly as labor markets tighten, recruiting and retaining qualified employees is a challenge, and it becomes more difficult if current and potential employees are concerned about being comparatively underpaid.”

European employers are also moving slightly more aggressively to address workplace sexual harassment by updating HR policies (32 percent in 2019, up from 26 percent in 2018), more proactively addressing complaints and misconduct (up from 23 to 31 percent) and strengthening investigative procedures (30 percent, up from 23 percent).

Furthermore, a fair percentage of respondents indicated European governments are taking steps to combat sex-based harassment and discrimination in the workplace, with 42 percent supporting the requirement that companies designate a point of contact for workers to bring allegations and 35 percent supporting mandatory reporting on the state of gender equality.

“Given that strict regulatory action has not been widespread in the countries surveyed, employers appear to be taking action to address sexual harassment in order to ensure a positive workplace for employees and help protect themselves from liability,” said Merete Furesund, a Littler partner in Norway. “Concern and attention to this issue have led European employers to take a range of concrete actions and boost their efforts to combat it.” 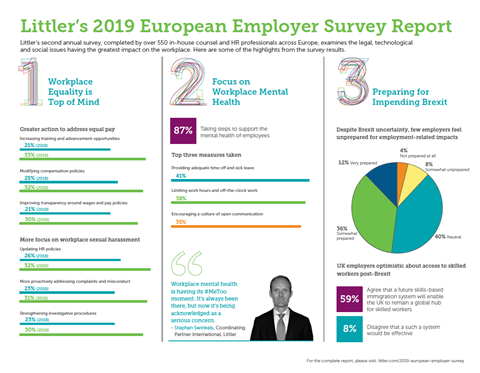 “These differences may reflect the level of media and legislative attention paid to these issues in Europe versus the United States,” Littler noted. “Legal measures requiring gender pay gap reporting have been more prevalent in Europe, while the #MeToo movement in the United States has given rise to a bevy of state laws requiring sexual harassment training.”

Despite the uncertainty surrounding the United Kingdom’s looming exit from the European Union, a high percentage of respondents feel prepared for Brexit’s employment-related impacts. According to the findings, 48 percent said they’re somewhat or very prepared for Brexit’s employment-related impacts. Only 12 percent said they’re unprepared or somewhat prepared, and the remaining 40 percent are neutral. U.K. respondents expressed the highest degree of preparedness, with 67 percent saying they feel very or somewhat prepared.

Littler noted this confidence could be driven by the proactive steps employers have taken, such as moving their headquarters out of the United Kingdom, opening new offices on the mainland, and identifying employees who would be affected in order to plan for work permits or replacements. Moreover, 59 percent of respondents expressed optimism about the U.K. enacting a skills-based immigration system post-Brexit, saying such a system will enable the nation to remain a global hub for skilled workers, while only 8 percent express skepticism.

“For U.K. employers, having access to the skilled workers they need to run their businesses is absolutely critical,” said Paul Quain, a Littler U.K. partner. “A general climate of uncertainty that makes preparation difficult as companies don’t know what they are preparing for—combined with some anti-immigrant sentiment, including against non-British EU nationals, that has been seen by the British government as a key driver behind Brexit—leaves a great deal of ambiguity around a post-Brexit skills-based immigration system.”

The survey report covers a range of other legal and HR issues impacting European companies, including unconscious bias in the workplace, trends in artificial intelligence and robotics use, the significant rise in spending related to the EU’s General Data Protection Regulation, and the impact of the European Court of Justice’s decision on employee working-time monitoring.