In the early 90s, long before compliance became a stand-alone profession, Alan Halfenger was a young law school graduate weighing whether he wanted to work for a district attorney’s office or get into a corporate setting. When an opportunity arose in investment banking, he took it.

Compliance wasn’t exactly his career objective at the outset, but it quickly became his path. “I stumbled into it,” he says. In those days, compliance functioned in something of a supervisory capacity, says Halfenger. He trained and pursued certifications required of broker-dealers to demonstrate his knowledge of the business.

Soon after, the Gramm-Leach-Bliley Act would break down the Great Depression-era barriers between commercial banking and investment banking, transforming the way financial institutions would do business. Halfenger went to work for Pricewaterhouse (before it was PwC) to help develop banking subsidiaries that complied with the new provisions. “It was an interesting crossroads in investment and commercial banking,” he says. “For me, it became very interesting.”

Then Halfenger settled in at J.P. Morgan in 1999, where he would encounter a professional mentor who offered a course correction. Halfenger’s mentor would put him on the path of pursuing compliance not just as a job function, but as a career. “He thought of compliance as a career progression for junior people,” says Halfenger of his former compliance boss. 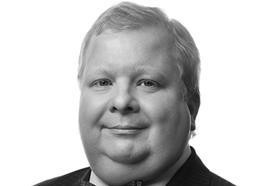 Quote: “Like any relationship, whether professional or personal, it starts with trust. You’ve got to get to know people—what worries them, what keeps them ticking, and what they think is silly. Having that ‘no police’ reputation hurts compliance.”

Halfenger began at J.P. Morgan with duties like supervising municipal securities activities and developing guidelines and policies for e-commerce. He progressed into higher level duties to eventually become chief compliance officer for the retail brokerage division. He marshaled a staff of 50 compliance officers and attorneys to oversee compliance at three separate broker-deal operations under the corporate umbrella. Earlier in his run at the banking firm, he had served as chief compliance officer for J.P. Morgan Private Investments, a registered investment adviser and commodities pool operator.

It was here that Halfenger came to appreciate the critical connection between not just knowledge of regulatory requirements but also knowledge of the business. “At the senior levels, you have to have both of those,” he says. “My technical skill set is that of a lawyer and a regulatory guy, but my passion is for the markets. I love watching and participating in the markets, transactions, and deals. For me, that’s the fun part.”

With compliance well in hand at J.P. Morgan, Halfenger moved on to new professional challenges in the mid-2000s by helping establish and build compliance operations at smaller firms. He spent a few years at hedge fund sponsor Sankatay Advisors establishing compliance and internal audit functions, and then several more years at affiliated Bain Capital, a venture capital firm, where he was charged with raising the bar on compliance.

Today, instead of working for one financial institution at a time, Halfenger is a consulting partner at ACA Compliance Group, a firm focused on regulatory compliance needs of financial services companies. He is the firm’s subject matter expert on global anti-money laundering, anti-corruption, and know-your-customer issues.

But Halfenger is doing much more than just providing services where asked. He’s become a bit of an evangelist for the compliance profession. He speaks at industry conferences, writes professional articles, and interacts with the academic community to promote development of the profession.

He sees the challenges compliance officers face today—including getting the resources necessary to do the job and finding the right skills to round out a robust compliance team—and he has bold ideas on how to meet them.

“One of the skillsets that is often missing in compliance is having the ability to talk about or evangelize about what you do,” says Halfenger. “Chief compliance officers have to figure out how to ask for resources.”

As an example, many folks who hold chief compliance roles today cut their teeth in a regulatory agency, like the Securities and Exchange Commission or the Financial Industry Regulatory Authority, says Halfenger. While in law school or enforcing regulatory requirements, they didn’t necessarily learn the business side of compliance. “No one taught them how to budget or manage,” he says. “No one taught them how to sell a program or build relationships. How do we develop that CCO as a professional manager of a compliance program?”

Building relationships is a key starting point, says Halfenger. Compliance officers who can establish themselves as business partners with operational personnel will achieve more than those who approach compliance as an exercise in saying “no.” They’ll do a better job, too, of making the business case for more compliance resources.

“Like any relationship, whether professional or personal, it starts with trust,” says Halfenger. “You’ve got to get to know people—what worries them, what keeps them ticking, and what they think is silly. Having that ‘no police’ reputation hurts compliance.”

That means sometimes compliance leaders have to learn to live with a little risk, says Halfenger. “You’ve got to have a conversation with business people about what the ramifications are,” he says. “When you invest, you look at the upside and the downside. When you’re having a conversation around regulatory results, it’s the same thing. Here are the rules. Here’s the ambiguity. Here’s where we can take some risk, but here are some places where we don’t take risk.”

It’s about analyzing risk in context, he says. “Where are the regulators, the markets, the clients?” he says. “All risk is not in a vacuum.”

Halfenger describes himself as an “academic at heart,” one of the reasons he likes speaking, writing, and advocating for more compliance-focused curriculum at academic institutions. “The universal commentary with chief compliance officers is we can’t find people who know what compliance is and are interested in it in the zero-to-five-year range,” he says. “If we’re all out there fighting over the same ex-auditors or ex-regulators, we should be investing in development of the profession.”

He’s also an advocate for leaders in the profession coming together more through professional associations and conferences to develop compliance as a career. “The legal profession has its bar, the medical community has its trade association, but the closest parallel for compliance is auditors,” he says. “We have wonderful substance at compliance conferences, but very little career development or career advice around how you do your job.”

In his role as a consultant, Halfenger seeks to work with compliance leaders on those issues. A significant part of his role with ACA is to promote the firm’s compliance support solutions—essentially outsourced compliance services for firms that don’t have the resources internally for every piece of a complete program. One aspect of that includes management consulting with chief compliance officers to help them manage the finer points of budgeting and resource planning—“figuring out how to do more with less,” says Halfenger. It also includes on-site support to fill staffing gaps, or outsourced services, as narrow or broad as the client needs.

Halfenger also spends a lot of his time consulting on compliance with anti-corruption and anti-money laundering rules, especially as investment advisers face proposed rules that Halfenger remembers well from his days in the broker-dealer world. “Many of the issues will feel the same,” he says of Treasury’s proposed rule that will establish new filing requirements for registered investment advisors around anti-money laundering and suspicious activity.

In addition, Halfenger spends a great deal of time consulting with hedge funds and private-equity firms on a variety of issues, he says, including the latest regulatory trends and developments. It’s not unlike the consultations he used to provide for colleagues when he was inside the firms. “I happened to work for a conservative, progressive firm that started to do some of these things early, so I’ve seen the business and the profession grow up,” he says. “I’m one of the old guys in it now.”

Despite his considerable experience, Halfenger isn’t finished developing his own expertise in the field. He’s planning to pursue a Master’s in business administration. “I want the credentials and the knowledge,” he says.

And he’s even learning Mandarin Chinese. “I say to every young compliance officer: Learn a language, and learn one that’s important,” he says. “It will take me 10 years to be any good at it, but I’m trying. Right now I know enough to be polite. I can probably muddle my way through a cab ride conversation.”

Halfenger says he’s seen big changes in compliance over the course of his career so far, and they’re positive changes. Now the challenge is to engage the next generation and bring them into the profession, he says. “For me, it really was a stumble into it.”