Revenue recognition was the top accounting area for audit restatements in 2019 for the second straight year, a new report finds.

According to Audit Analytics’ latest annual restatement study, the total number of restatements dropped for the fifth consecutive year to a 19-year low of 484.

Reissuance restatements, where prior financial statements are reissued because they can no longer be relied upon, were at their lowest level since the disclosure requirement took effect in 2005, the report states. They declined every year for 13 years, except for a minor increase in 2018, and totaled only 85 in 2019. Reissuance restatements by U.S. accelerated filers totaled 32, also the lowest since 2005.

In addition, Audit Analytics found the severity of 2019 restatements to be low in every category it measures, including negative impact on net income, average number of restatement issues, average number of days that had to be restated, and average time needed to assess and correct the misstatement.

2018 was the first year of public company reporting of revenue under Accounting Standards Codification Topic 606 (Revenue from Contracts with Customers). Companies are still working through implementation issues.

There have been a number of amendments by the Financial Accounting Standards Board (FASB) to Topic 606 guidance, along with Securities and Exchange Commission comment letters for those filers who adopted the standard. In February, FASB issued an implementation Q&A on the revenue recognition guidance. 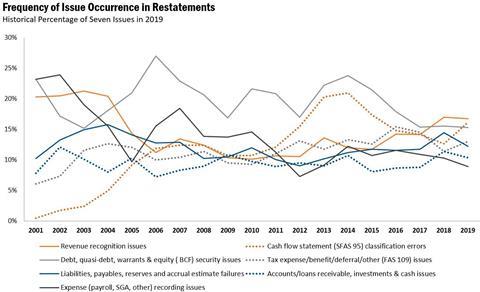