The latest installment of Audit Analytics’ annual restatement study finds a small increase in the most serious restatements, those where companies had to correct material errors by reissuing past financial statements. Public companies issued 119 such restatements in 2018 compared with 110 in 2017, which was an 18-year low after several years of steady decline.

Revision restatements, those where companies corrected errors that did not undermine reliance on earlier financials, declined for the fourth straight year to 344, the report says. Grouping both types, the total number of restatements tapered for the fourth straight year to an 18-year low of 516. Based on the number of public filers, Audit Analytics says, that means 5.7 percent of companies issued some kind of correction to financial statements, which is an all-time low for the analysis.

By several other indicators noted in the report—such as earnings effects, the number of issues addressed in each restatement, or the number of days in prior periods that had to be restated—restatement metrics generally held steady or diminished in severity, according to the report.

Perhaps most noteworthy in the analysis, revenue recognition overtook even debt and tax issues as the most common cause for restatements in 2018, which was the first year for all public companies to report revenue under a massive shift in accounting standards. Companies implemented Accounting Standards Codification Topic 606 to introduce a new, five-step method for determining when and in what amounts to recognize revenue in financial statements.

Revenue recognition drove 85 of the restatements tallied in the 2018 analysis, or 16.5 percent—an increase from 80 the year before (14 percent that year). Revenue recognition even outranked debt, quasi-debt, warrants, and equity issues at 84 (16.3 percent).

Experts predicted restatements due to revenue recognition might increase in the first year of implementing ASC 606, which did away with hundreds of disparate methods across industry sectors to introduce a single approach to be followed by all companies. Comment letters from the Securities and Exchange Commission drove some changes in reporting and restatements in the year of adoption. 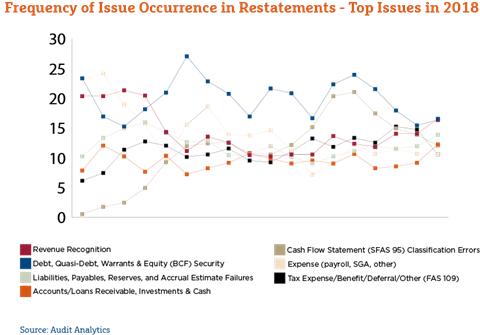