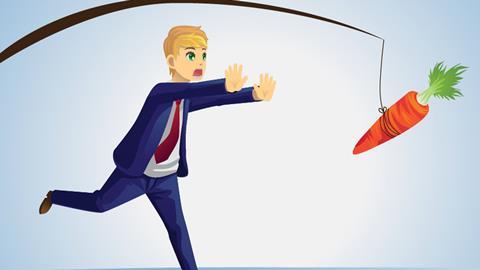 Analysis: When a bonus becomes less incentive, and more compromise

When delivering training in relation to anti-bribery and corruption I always ask the trainees to raise their hands if (1) they’ve ever taken a bribe, and (2) whether they’ve ever offered a bribe. I then watch a roomful of people look at me with a combination of surprise, confusion, and anger when I raise both my hands … and then I ask all those who are parents to raise a hand before asking the first two questions again.

The point is: Our lives are substantially built upon incentives and compromise. We offer rewards to children for good behavior and, subsequently, our children offer good behavior in return for a reward. It is a natural process; there is nothing malicious involved—but boundaries are imposed, and there are times when bad behavior is dealt with by way of a sanction, which may include the deprivation of a prior reward or some fun time.

As adults we find that our employers offer incentives by way of bonuses, although I suspect there have been many instances when bonuses have been used as a compromise of values. To explain: Those who are low down on the pay scale are actually more likely to be reliant upon the provision of an annual bonus than those higher up the pay scale who receive a far higher bonus. Consequently, this may make lower-paid employees far more vulnerable to people who can influence or threaten their bonuses.

I have often pondered how and why so many people at Volkswagen participated in such a deceptive and clearly criminal course of conduct while others who witnessed the bad behavior stood by and did nothing. Could it be a case of when a bonus is actually a bribe? On the same track, I challenged U.S. law enforcement officials and regulators as to why they failed to recover bonuses, pay raises, and commissions paid to bankers who structured and executed lucrative schemes to breach sanctions programs. I was never given a credible answer.

As a former police officer, I was accustomed to a bonus that saw my wife and three children wake up safe and well each morning. As a senior financial crime compliance professional working for some of the world’s largest companies, I was fortunate to be well paid and—most of the time—received very attractive financial bonuses. I say “most of the time,” because I once saw my yearly bonus drop to zero: the year I blew the whistle on multiple money laundering schemes operating through Wachovia Bank N.A.

It caused me to contemplate how and why compliance professionals are paid a bonus. Please allow me to suspend any modesty and assert I did a good job at Wachovia Bank, undoubtedly too good, because I upset a lot of people—important people. Important, because these same people had substantial influence over my bonus and indeed my career. Perversely, Wachovia Bank operated a “score card,” whereby the money-making business units of the bank scored the quality of the service provided by support functions, such as compliance. Top score equaled top bonus and, before I arrived, compliance ranked No. 1 on the scorecard quarter after quarter.

Ultimately the bank and I fell out, but not before I had been advised my bonus would be zero (in fiscal terms). Four months after my departure, the bank paid a $160 million penalty related to anti-money laundering failures; this fall from grace caused me to write my former boss and rebuke him. I took great delight in telling him my bonus was not “zero,” but rather the retention of my integrity and credibility when others lost theirs. I would always make money, I declared, but once integrity is gone, it is very difficult to get it back.

So I ask you in a roundabout way: “Should compliance professionals be paid a higher salary and at the same time be taken out of the bonus process?” I ask, as it is my belief far too many people use the bonus process to intimidate others and cause them to compromise their professional integrity. Moreover, should regulators and legislators demand this? And, perhaps most importantly, would you welcome this?

While compromise is necessary in all successful relationships, it should never extend to having your values compromised.