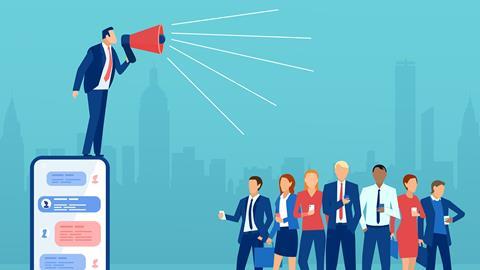 Pressure on companies to respond to employee activism has been steadily building, fueled by increased emphasis from the public; investors; and employees on environmental, social, and governance (ESG) initiatives.

Some ESG issues have become flashpoints for activism. Corporate responsibility for contributing to climate change is one. Another is promoting a more diverse corporate leadership and workforce, seen through the lens of the Black Lives Matter and #MeToo movements. Employee activists are increasingly challenging their employers to re-evaluate institutional biases and problematic vendor relationships.

And then there are political issues in the United States, particularly in the wake of the 2020 presidential election and the Jan. 6 attack on the U.S. Capitol. The list goes on.

“Millennials are becoming increasingly powerful and are now taking more senior roles. They genuinely care about the demonstrated ethics and values of their employer organizations,” said Valerie Charles, a partner at global advisory firm StoneTurn, during a panel discussion at Compliance Week’s National Conference last month. “That’s not to say that our generation doesn’t take ethics seriously, but it’s different. The younger set more concretely associates their personal identities with where they work and the values of the organization. It’s no longer enough to talk the talk; you have to walk the walk.”

Megan Reitz, professor of leadership and dialogue at Ashridge Executive Education at Hult International Business School, has been studying speak-up culture and employee activism for the past seven years. She argues that not only is employee activism here to stay—it will become a defining feature of the workplace.

“Millennials and Gen Z in particular have more of an activist bent and will choose where to work according to the action that those organizations take,” Reitz said. “Refusing to engage with employees on issues of the day may make it harder for companies to attract the kind of talent that you need or want.”

“The younger [generation] more concretely associates their personal identities with where they work and the values of the organization. It’s no longer enough to talk the talk; you have to walk the walk.”

In addition, workplaces that show themselves as willing to engage with employees on a variety of issues, whether work related or not, provide other benefits, she said.

“The questions around, ‘What do you stand for?’ and, ‘How do you make your choices about what impact you have on the world?’ are really important ones to consider,” she said. If your company is not engaging with employees on these issues, it raises some red flags—most notably it could indicate your company can’t handle and engage with different perspectives.

“And then you’ve got a bigger problem than just figuring out employee activism. You’ve got an issue with innovation and change as well,” she said.

Tae Wan Kim, associate professor of business ethics at Carnegie Mellon University, has researched how algorithms can produce biases in decision-making that are impossible for consumers to see and difficult for companies to explain. He argues businesses have a moral duty to explain how algorithms make decisions that affect people.

Kim said he was approached by a large company that wanted to provide an explanation to its customers on targeted advertising. Their motivation was not return on investment or profit but rather to push the company in a more ethical direction. Kim said the company was motivated by pressure from inside (employees) and outside (media and customers).

“They came to understand that, intrinsically, ethics is important. They were sick of being criticized by the media. Employees were sick of feeling guilty about the company’s status,” he said. Kim said companies viewed as having high ethical standards, particularly in the technology industry, have a leg up when they compete to attract the best talent.

Corporate response to employee activism has varied. The most common approach has been to attempt to remain apolitical. Coinbase CEO Brian Anderson tried to keep politics out of the workplace in a controversial September 2020 blog post, in which he banned workplace discussions on “causes or political candidates internally not related to work.”

“I recognize that our approach is not for everyone, and may be controversial. I know that many people may not agree, and some employees may resign,” he said. About 60 Coinbase employees did just that and resigned a month later, according to Forbes.

Online furniture retailer Wayfair similarly tried to put its head in the sand in 2019 over an employee petition demanding the company stop selling furniture to U.S. detention centers that housed immigrant children. The resulting firestorm over a very small sale damaged Wayfair’s brand and made it harder for the company to attract and retain top employees, according to Forbes.

Employee activism has also translated into union activity, as it did among Amazon warehouse workers in Alabama. But at least with union movements, companies have guideposts set by the National Labor Relations Board rules and legal precedent.

Many managers are finding themselves ill-equipped to deal with employee activism, Reitz said. It isn’t like whistleblowing, where many companies have established processes to report workplace safety problems or illegal behavior through hotlines and the like.

Companies’ top-down organizational structures make it difficult, if not impossible, for the average employee to engage in activism at work. And that is by design, Reitz said.

Maybe your organization is one with “open door” policies. Any time an employee wants to bring up an issue, he or she can just walk through a manager’s door and talk about it. But that doesn’t reflect reality, Reitz said.

Many employees are intimidated by those in power in their organizations—an unbalanced relationship built to favor the manager, and his or her opinions, over those of the employee.

“Can we stop talking so much about how brave people need to be and start talking about why they have to be so brave in the first place?” Reitz asked.

Tips for encouraging a speak-up culture

Not every organization has to become a veritable vessel for advocacy, like outdoor clothing retailer Patagonia or Ben & Jerry’s Homemade Holdings, Reitz said.

Instead, view activism as an opportunity to engage in meaningful discussions with your employees. Yes, there is risk involved, and the unknown is scary. But the benefits of being perceived as a company that values employee input—that takes their concerns about the world around them seriously—may outweigh the drawbacks, she said.

Here are some practical steps your organization can take to foster a workplace culture where speaking up is not only acceptable but encouraged:

Handling employee activism should be part of a company’s strategic plan, which would produce more thoughtful, actionable results. Linking executive pay to ESG targets would be another way to turn words into actions, Reitz said.