A new global business ethics survey released Friday by the Ethics & Compliance Initiative seeks to explain what factors contribute to employee pressure to compromise ethical policies or regulations and how to reduce that pressure.

The ECI’s 2020 “Global Business Ethics Survey” (GBES) explores six types of misconduct: abusive or intimidating behavior; conflicts of interest; corruption; discrimination; sexual harassment; and health and/or safety violations. Employees that indicated pressure to bend the rules in their response were also more than twice as likely to observe misconduct.

“Organizations cannot function effectively if the rules and policies that serve as the guidepost for employees’ actions and behaviors are not followed,” Melissa Fraser, senior survey researcher for the GBES, said on a Webinar discussing the results. “Increased pressure goes hand in hand with increased misconduct.”

The GBES fielded questions from over 18,000 employees across 18 countries spanning the following continents and regions of the world:

“In many geographies and emerging markets, local companies are much more willing to bend the rules and take risks,” said Steve Guymon, senior advisor of global ethics and compliance at pharmaceuticals company Eli Lilly. That, in turn, puts greater pressure on sales teams in other parts of the world to also engage in high-risk activities.

The way that pressure is addressed at Eli Lily is, “where we know about it, to take a very proactive approach … to let employees know there is no pressure to engage in such activities,” Guymon said. “We try to go back to the basic understanding of the risks in each market, what the requirements are in that specific market, and then help employees to try to deal with specific pressures by having to escalate to leadership those discussions.”

According to the report, the following key factors impact employee pressure to compromise rules:

At Dell Technologies, for example, CEO Michael Dell himself has been  vocal about the values of the company, even writing a blog on LinkedIn, “When Your Name is on the Building,” discussing how important values are to him and the business. “All management levels know the expectation that not only are corporate values important to Michael Dell, but he expects them to be important to everyone,” said Alicia Olmstead, global ethics and compliance consultant at Dell.

At Dell, for example, managers are provided with targeted messages—not just from ethics and compliance, but human resources and other departments—through a global manager portal. “We have a lot of discussion scenarios that we put out with facilitator guides to help managers understand how the policies apply to them and their team and how to have those conversation within their own group, so that they can help their people understand what it means,” Olmstead said. 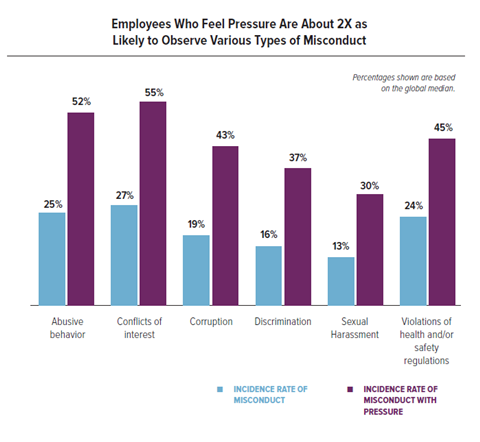 More responsibility equals more pressure. Employees who self-identified as being part of top management were more than twice as likely to experience pressure to bend the rules compared with employees who self-identified as being non-members of management (30 percent versus 17 percent). Among middle management, 25 percent said they felt pressure versus 22 percent of first-line direct supervisors with direct reports.

While the impact of the COVID-19 pandemic wasn’t included in the results of the survey, its wider repercussions build upon this risk, as employees and employers shifted to telework, flexible work schedules, cost-cutting measures, and other extreme adjustments almost overnight. “It is imperative during these times of organizational changes that ethics and compliance does not get lost in the shuffle,” Fraser said.

All told, an ethically healthy company is one in which employees feel little to no pressure to compromise ethical standards; observations of misbehavior are properly reported; top leaders and middle managers alike encourage ethical behavior and communicate it openly and often; and, where and when employees witness misconduct, they feel comfortable reporting it, with no fear of retaliation.