‘Crude Intentions’ gets at the why of compliance

From time to time, I am asked by compliance leaders for books they can recommend to commercial and business teams to better sensitize the frontlines regarding the wider societal consequences of bribery and corruption. 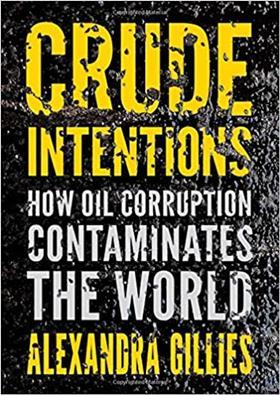 My list in that genre includes “Thieves of State” by Sarah Chayes and “The Looting Machine” by Tom Burgis, as both address transnational crime and corrupt ecosystems that strip societies of good governance, economic development, medical care, and all too often, human rights. Accordingly, another addition to that list is “Crude Intentions: How Oil Corruption Contaminates the World” by Alexandra Gillies.

Yes, it’s a book about corruption in the oil sector first—from oil exploration to oilfield service companies and oil traders, often called “upstream” and “downstream” services—but it’s so much more. It is an exquisitely well-written treatise on, as Gillies describes in her introduction, “the circulatory system of global corruption,” including the “system’s channels and pathways as it spreads and spreads,” which while well described in the oil sector, we have also seen time and time again in markets as diverse as life sciences, financial services, telecommunications, and defense. And Gillies also does not spare “accountants, lawyers and other enablers” who help to mask “corrupt money until it could be freely enjoyed by those who stole it.”

Further, “Crude Intentions” is not about a specific scandal, conspiracy, or country; rather, the book describes, as Gillies shared in a Q&A with Compliance Week, “a diverse set of real-world corruption cases from a wide range of countries, including Angola, Nigeria, Iraq, Russia, the U.S., Brazil, and Azerbaijan, replete with concrete illustrations and examples.”

But why should this be required reading by commercial, compliance, and leadership teams that might have no connection to or understanding of oil exploration or oilfield services? From my perspective, it’s a deep dive into a well-researched and thorough account about how, as the book describes, “neglecting corruption causes all kinds of harm, some of it deadly” and “no headline can capture all the channels through which corruption harms citizens and costs lives.” To those on the front lines of operations, and who might engage in bribery to “move things along” in their sales process, it can often appear innocent, victimless, or even what Harvard Professor Francesca Gino in a co-authored paper called “altruistic.”

After all, maybe bribing a poorly compensated healthcare practitioner to have a certain medical device used or medicine prescribed might look as advancing the health and welfare of those patients who need it most. To mitigate that illusion, a misconception I once held as a strong belief, we need to sensitize those in operations that any form of corruption or bribery, as Gillies describes, “keeps billions of people living in extreme poverty,” all the while “undermin(ing) political representation.” No one wants to think they are part of such an awful ecosystem, and a reading of “Crude Intentions” can go a long way toward educating those who work in high-risk regions as to the sharp end of their decisions.

It is our ethical (and legal) responsibility to know the integrity practices of everyone we interact with, and willful blindness with weak due diligence does not paper over being part of transnational crime.

“Crude Intentions” describes the novel ways bribes are paid and disguised, often through networks of “middlemen, agents, or fixers,” who, as Gillies shares, can “provide legitimate services” but can also be “intermediaries for bribery,” which we continue to see in a majority of our anti-bribery enforcement investigations, prosecutions, and settlements. But it all returns to the author’s proposition that being a part of these corrupt ecosystems, either as a corporation or as an individual, is “being complicit in maintaining the undemocratic and unequal systems of governance” in countries. And that’s the part of ethics and compliance training that I often see missing—how this all impacts societies and people, or what I call the why of compliance.

Gillies’ subjects do share some of our compliance journey—where many of the organizations that had a problematic past are now undertaking “important behavioral changes” in trying to avoid future issues—and she describes those efforts as being more than “just window dressing.” She also provides a deep global overview of the “teeth” of international law enforcement tools, including the recent U.K. “unexplained wealth orders,” as a “particularly exciting advance.”

It’s engaging education for those who might not have a view of global anti-bribery enforcement. The book winds down with other anti-bribery initiatives that have had an impact on rolling back the tide of corruption, including those from civil society and the media as well as transparency crusades. In combination with national regulatory authorities, these sectors are all “vital ingredients” in surfacing and eradicating bribery and corruption, but again, only collectively, due to the authoritarian forces and kleptocratic networks that are stubborn and baked into so many regions of the world.

“Corruption will never go away entirely in the oil sector or anywhere else people can make a fortune by bending the rules,” Gillies writes. Well put.

And with respect to our channel partners, intermediaries, and agents, who often intertwine legitimate and corrupt business services, we still work in a world where “corruption risks are baked into their business model.” Once again, Gillies provides an in-depth description of why commercial managers need to abandon the illusion that “what my channel partners do with their profits is none of my business.” As her description of anti-bribery enforcement actions and societal consequences demonstrates, it is our ethical (and legal) responsibility to know the integrity practices of everyone we interact with, and willful blindness with weak due diligence does not paper over being part of transnational crime. As I once heard a Department of Justice official share at a compliance event, switching from a direct sale to agent or distribution model does not change or in any way alter your risk profile or responsibility.

The next time you are in a training session, walking your commercial teams through your compliance policies, rules, and procedures, it might be a good time to distribute “Crude Intentions” and start with a quick read on Page 215 to spark conversation. There, Gillies shares how “corruption has deprived citizens of billions of dollars that would have paid teachers, repaired roads, and brought medicine for sick kids.” That’s your why of compliance. Maybe lead with that passage, and then share why your compliance program is there to guard not only the success and safety of your workforce, but also to protect those in the world who deserve good health, education, and transparency of governance.

Richard BistrongRichard Bistrong is the CEO of Front-Line Anti-Bribery and a contributing editor of the FCPA Blog. He was a former International Sales VP, FCPA violater, and FBI/U.K. cooperator, having served 14 months in federal prison for violating the FCPA.