Gender pay gaps wormed their way further into the compliance space in 2021, digging in across job title, industry, education level, organizational size, and years of experience.

Out of 308 respondents to our “Inside the Mind of the CCO” survey, 56 percent identified as women compared to 44 percent for men. Pay disparity existed at multiple positions and ranks and accelerated at higher levels of authority. Among a cohort of 90 CCOs and chief ethics and compliance officers (CECOs), women were paid 71 percent of what men with the same title were paid on average.

Pay inequity at the top

Last year’s survey found male CCOs/CECOs were paid an average of 17 percent more than women. This year, the gap widened to 29 percent. 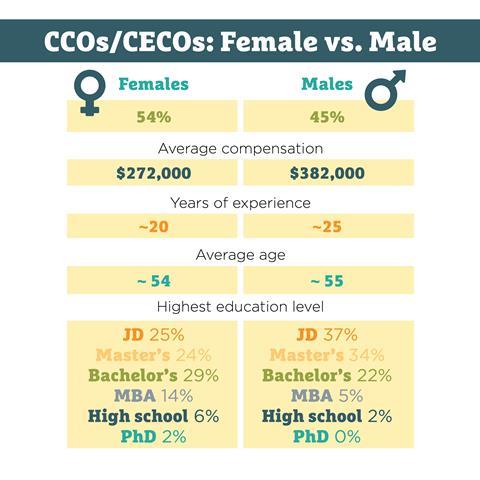 The statistic that women make about 80 cents for every dollar paid to a man (Hegewisch and DuMonthier, 2016) is so widely cited that it has reached a state of banality. Yet, it’s as true and appalling as ever.

Skeptics contend the wage gap is driven not by gender bias but by voluntary choices made by men and women, such as choice of occupation (Schieder and Gould, 2016). While it’s true highly lucrative fields like STEM (science, technology, engineering, and mathematics) tend to be male-dominated, the study points out—and our survey shows—the pay gap exists even within the same occupation.

There is also a societal tendency toward blame-shifting. Women choose lower-paying careers. Women lack confidence. Women do not advocate for themselves enough. Women do not work as many hours as their male counterparts because of “domestic responsibilities.” Women are at fault.

“There tends to be this kind of framing that this is about ‘fixing the women’—that it’s women not asking [for the pay raise]; that it’s women not being assertive enough. This was the argument of books like ‘Lean In.’ I very much doubt that is the case, especially as data does show women get penalized for being assertive,” said Alison Taylor, executive director of Ethical Systems.

Even if this framing were true—just for argument’s sake, let’s say—there is gender bias inherent in the assumption assertiveness is primary to effective leadership. Business psychology professor Tomas Chamorro-Premuzic argues that as a society, we conflate confidence with competence and, in doing so, are fooled into believing men are better leaders than women.

“The truth of the matter is that pretty much anywhere in the world men tend to think that they are much smarter than women,” Chamorro-Premuzic wrote for Harvard Business Review. “Yet arrogance and overconfidence are inversely related to leadership talent—the ability to build and maintain high-performing teams, and to inspire followers to set aside their selfish agendas in order to work for the common interest of the group.”

“You’ve got to be personable, so that people will come toward you with trust and openness. The kind of person nobody wants to talk to will never be effective as a CCO. Women tend to have a warmer approach.”

A study published in October found women received substantially lower potential ratings than male colleagues despite receiving higher performance ratings, and that those differences accounted for 30-50 percent of the gender promotion gap (Benson, Li, and Shue, 2021). It’s not that women are not gunning for promotions. It’s that in the minds of supervisors, they are not afforded the same grace period to “grow into the new role” as men are.

The potential of women is being underestimated, and it shows. Not just through how often women are promoted, but in how they are compensated—valued—by their companies.

“This is the story across the private sector. This is not something that’s just happening in compliance,” said Taylor.

But because compliance professionals are supposed to be the voice of ethics at their organizations, it seems ironic to find these pay disparities in our own survey data. Only 8 percent of respondents said their companies rely primarily on gender pay analysis to ensure accountability with diversity, equity, and inclusion (DEI) efforts.

While there are a lot of gray areas involved in compliance, when it comes to compensation, it’s all right there in black and white. So, why aren’t companies prioritizing internal salary reviews to fix pay inequity?

“It’s a good question. Maybe this data is not transparently available. … These women may not know how underpaid they are,” offered Taylor.

A peak behind the veil

Shelly Scott, managing director and head of the Global Legal & Compliance practice at executive search firm ZRG Partners, offers a unique perspective on gender parity and compensation in the compliance space. She has more than a decade of executive search experience, including leading CCO searches for large, well-known companies and guiding candidates through compensation negotiations. 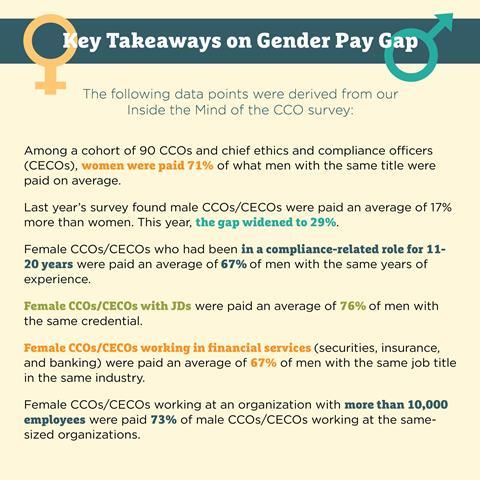 From her experience, she said large companies are not paying female candidates less than male candidates. On the contrary, she has witnessed compensation go up over her tenure in the space. She also sees the profession as “very much a woman’s domain.”

In his HBR article, Chamorro-Premuzic observed women tend to outperform men in emotional intelligence and humility, but that these are qualities that tend to be undervalued as leadership traits. In a similar vein, Scott made an observation about women’s fit as CCOs: “You’ve got to be personable, so that people will come toward you with trust and openness. The kind of person nobody wants to talk to will never be effective as a CCO. Women tend to have a warmer approach,” she said.

She tries to be transparent on both sides when it comes to compensation. “Usually what happens is both sides give me the information they have (i.e., a range or expectations), and then I have to try to make that work.” She said she would never recommend a candidate take a pay cut, “unless there were some really extraordinary circumstances.”

Asked whether men are better self-advocates than women, Scott’s answer was no. She cited a recent example where she led a CCO search for a company offering a $1 million package. The candidate who landed the job was a woman, “and she was a tiger about getting what she deserved,” said Scott.

However, asked whether men were more willing than women to go for job roles outside their comfort zones, Scott’s answer was yes. “I’ve had many women candidates who’ve said, ‘Oh, I don’t know if I can do that.’ They get on the fence, saying they feel they can’t be 100 percent. … Whereas men generally don’t think that way. Their approach is more, ‘Let me get there, and I’ll figure out how to do it.’” said Scott.

There is research that suggests men tend to apply for jobs where they only meet 60 percent of the qualifications, while women will only apply if they meet 100 percent. Perhaps, then, it’s not just men who underestimate women’s potential, but women themselves.

The ticket could be transparency. Scott said one reason the “tiger” went after the $1 million CCO package relentlessly was because it was a public company, so she knew the compensation of the top five highest-paid executives and refused to be sidelined.

Thus, if women only knew, in black and white, what pay parity looked like at their companies, they might outpace men in assertiveness.