It’s a stereotype that has circulated for decades: When you think of a female-dominated industry, your mind jumps to healthcare. Compliance Week’s “Inside the Mind of the CCO” survey seems to corroborate that stereotype; but upon closer inspection, the findings are more complex than they appear.

Eighty percent of surveyed compliance professionals in healthcare identified as women—which is perhaps unsurprising. What is more striking was the preponderance of females holding down senior-level compliance roles: Of the 13 CCOs or CECOs in healthcare organizations surveyed, 76 percent were women.

At first glance, that would seem to be unremarkable—except for the fact healthcare is notorious for its scarcity of female leadership representation. According to two different reports by consulting firms Oliver Wyman and Boston Consulting Group (BCG), women dominate healthcare organizations everywhere but the top. According to Oliver Wyman’s “Women in Healthcare Leadership 2019” report, women comprise 65 percent of healthcare’s workforce but only about 30 percent of C-suite positions; worse still, women hold down only 13 percent of healthcare CEO positions.

So why is it women don’t seem to be having trouble finding their way to the CCO position? BCG’s “Women Dominate Health Care—Just Not in the Executive Suite” 2019 report might inadvertently shed some light: Women in healthcare tend to work in “administrative” functions such as human resources, risk, and legal, the report states. One possible theory, then, might be that because these functions partially constitute the field of healthcare compliance, a woman who has been working in one or several of these areas for a number of years will have established a clear path to the role of CCO.

“I think that is absolutely right: that we would tend to see chief compliance offers stemming from those types of professions,” says Mary Shirley, senior director of ethics and compliance at Fresenius Medical Care North America and a 2019 CW Top Minds award winner. “They are some of the most popular disciplines that women (and men) have come from before becoming CCOs or entering the compliance industry.”

Shirley cited the female CCO at Fresenius, formerly a lawyer in private practice, as proof the survey findings reflect her reality. “I am very lucky to work for a female chief compliance officer who has formidable intellect and savvy navigating the in-house compliance world,” she said. “It is really inspiring. There are a lot of us in the department, particularly the women, who can see her doing well and blazing the trail.”

Reconciling the research on women in healthcare

Gender notwithstanding, compliance leaders in healthcare settings fulfill a critical role in navigating a highly regulated and high-risk industry. Healthcare compliance issues stem largely from patient safety, privacy of patient information, and billing practices. In late 2018, NAVEX Global published a list of the top regulatory challenges in the healthcare environment, notably including HIPAA and data breaches; false claims and whistleblower suits; anti-kickback and physician-hospital issues; and more. For their leadership and expertise, healthcare compliance leaders are compensated handsomely: 54 percent of surveyed CCOs in the healthcare space reported annual compensation  of $200,000 or more.

Is a JD necessary in healthcare compliance?

Number of years of experience is one tangible factor that seems to lead to securing a senior-level compliance position in a healthcare organization. For men and women alike, 53 percent of surveyed CCOs and CECOs indicated they have been working in a compliance-related role for over a decade. But in addition to seasoned, on-the-job expertise, the survey results also indicated a JD is an especially valued asset in the field of healthcare compliance. 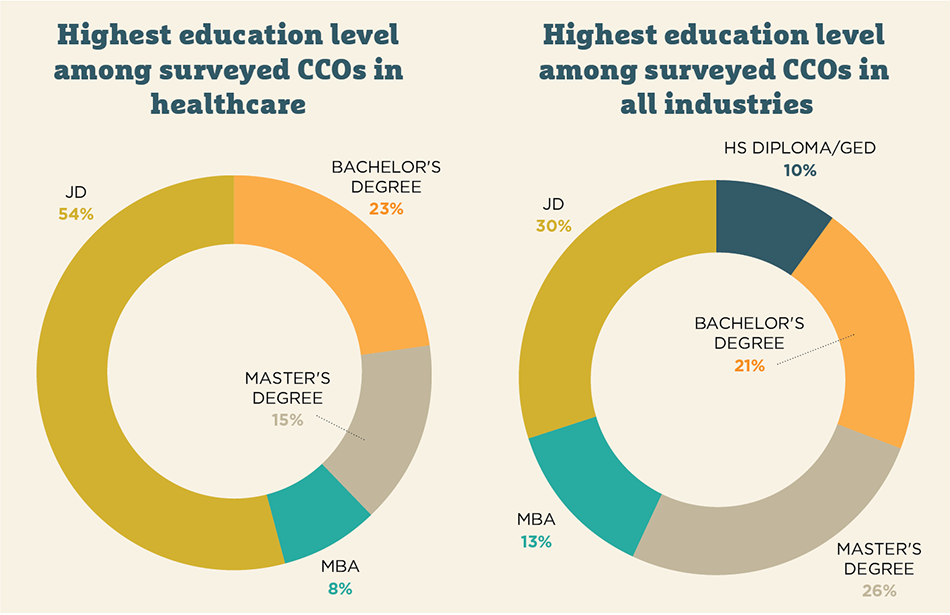 Clearly, compliance leaders in healthcare organizations are a highly educated group, but why is a background in legal knowledge and expertise particularly pervasive?

Shirley believes it boils down to two primary reasons.

Shirley believes organizations that are susceptible to this bias are doing themselves a disservice. “There are people that they could hire from the outside who could hit the ground running, and they need not be a lawyer to do a fantastic job.”