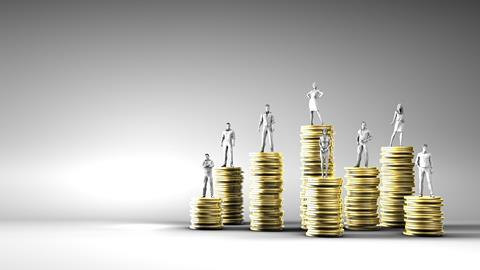 Meeting the criteria of a successful, high-paid general counsel

As the general counsel role at public companies continues to expand—from watchdog to a more pivotal strategy and risk management role, exacerbated by a pandemic—their compensation is steadily on the rise as well, according to the latest in-house counsel compensation report by Equilar and executive search firm BarkerGilmore.

The compensation report, which examined the 500 largest U.S.-headquartered companies (by reported revenue) that trade on one of the three major U.S. stock exchanges (Nasdaq, NYSE, or NYSE American), found median general counsel (GC) compensation increased by 12 percent since 2015, reaching $2.6 million in 2019.

Compensation varied by sector, with some showing steady increases and others being more volatile. Median GC compensation increased by more than 10 percent from 2018 to 2019 for each of the basic materials, communications services, consumer, defensive, and healthcare sectors. The financial services and real estate sectors saw large gains in 2018, but both declined slightly in 2019.

Not surprisingly, GC in highly regulated sectors—particularly healthcare—tend to make more money than sectors that aren’t as heavily regulated. “People that make the most money are making it on the back-end,” John Gilmore, managing partner at BarkerGilmore, said. “They’re making it with equity and cash bonuses.” According to the report, this is particularly the case in the technology sector, where only 11.8 percent of compensation comes from salary; followed by the healthcare sector, with 14.6 percent; and the utilities sector, where salary comprises 30 percent of compensation.

The report also looked at compensation relative to job tenure and education. Among “Equilar 500” GC, median compensation peaked at $2.9 million for those who have been at their companies for up to five years, and it was lowest among those who have been at the same company for at least 20 years. For that group, median pay for was roughly $2.1 million in 2019, a more than $800,000 difference in pay from those in the 0-5 years tenure range.

The survey findings also showed median GC pay peaked at nearly $3 million for those who earned their law degree 31-35 years ago. Beginning at 15-20 years since earning a JD, median pay declines for the next two-year ranges (21-25 and 26-30), and then experiences a 25.6 percent spike in the following year range (31-35), according to the report.

Across the Equilar 500, 56 women and 113 men held a GC role in 2019. While male GC outnumbered their female counterparts every year of the study, the ratio is “steadily decreasing,” according to the report.

“The No. 1 criterion that everyone is looking for is emotional intelligence. They’re really focused on that person who communicates exceptionally well, comes in confident but humble, is a good listener, and able to deal with very stressful situations in an even-keeled manner.”

The only pay component in which female GC earned more than males was in stock awards—which was $13,000 higher than the median value of stock awards granted to male GC. However, male GCs received performance incentives and annual bonuses that were 29.6 percent and 4.4 percent higher in value, respectively, than what female GCs received.

“There’s no disputing it, there is a gap,” said Gilmore. “That said, the gap is closing. What we’re seeing is that the number of women in these roles is increasing, and as the number of women increases, especially in these higher-level positions, it’s going to change that number.” For example, three of the top 20 people on the list of the highest-paid GC were men who have since retired and were replaced by women, and so next year, those numbers should start to level out more, he said.

Other factors play a role as well. For example, 38 women (62 percent) were promoted into the GC role from within their organizations. “Someone who is promoted from within tends to not be paid as much as if you were hiring a general counsel from outside,” Gilmore said. “That’s just the way it is.”

As with any gender-related compensation data, however, the numbers often don’t paint a whole picture. After all, most companies don’t make it a habit to engage in unfair hiring and compensation practices.

“I don’t see people getting hired just for the sake of hiring a minority or a woman,” Gilmore said. “I see it as them saying, ‘I want to see a diverse slate of candidates where everyone hits the same mark.’” Then it comes down to whether the job candidate is the right fit, culturally, for the organization, he said.

Another key characteristic of a successful GC is being able to roll with the punches. There’s no question that the pandemic has created big shifts in the day-to-day role of GC today, and that effectively changes and expands the skillsets that are required as well.

“The COVID-19 pandemic has inundated general counsel with a wave of challenges and uncertainty,” the report states. “General counsel are navigating their organizations through various issues—such as employee and customer safety and ensuring business operations continue despite a shifting landscape.”

From a social justice perspective, too, several GC anecdotally have said they now play a more upfront role in assisting the C-suite’s response to matters of social justice and ensuring that what is said, and how it is said, is dealt with an appropriate level of sensitivity and handled in the right way.

“The No. 1 criterion that everyone is looking for is emotional intelligence,” Gilmore said. “They’re really focused on that person who communicates exceptionally well, comes in confident but humble, is a good listener, and able to deal with very stressful situations in an even-keeled manner.”