A global outcry for racial justice reached a crescendo in 2020, and corporate America pledged to “meet the moment” with transformative change. According to our “Inside the Mind of the CCO” survey, there are macro signs of companies trying to move the needle, but gaps in DEI progress remain.

A year ago, 62 percent of 300 respondents to our survey said their company’s diversity and inclusion (D&I) efforts had moved more front and center in 2020.

This year’s survey shifted the focus to finding the proof in the pudding.

For starters, our 308 total respondents faced questions on DEI. While diversity and inclusion are essential organizational goals, equity recognizes advantages and barriers exist in the workplace which, left unchecked, preclude goals of diversity and inclusion from flourishing. Adding the “E” was necessary from an integrity standpoint but statistically compromised the validity of a year-over-year (YoY) comparison with 2020’s survey results.

“It’s such a sensitive time for our country and culture as Americans that we really have to invest in the right types of training. … DEI training feedback offers leadership a chance to create a psychologically safe environment for dialogue and questions to grow the culture.”

Acknowledging this caveat, this year’s survey dug deeper regarding companies’ DEI efforts and what compliance’s role should be therein. New questions delved into accountability metrics and whether respondents subscribed to the business case for DEI.

Overall, there are macro signs of companies moving in the right direction.

Survey respondents most frequently cited training (64 percent) among their company’s DEI efforts, compared to vocal support leading the way at 58 percent for D&I in 2020. This finding “appears to be a natural progression in advancing a strategic priority,” said Dr. Erica Alexander, deputy chief compliance officer at Howard University.

Further evidence attesting to enhanced robustness to DEI strategies is that respondents ticked off more boxes this year. Where only 32 percent selected “increased investment/staffing” in 2020, 44 percent did so in 2021. Likewise, where only 26 percent selected “policy changes” in 2020, 52 percent made that choice in 2021.

Respondents who selected “none of the above” decreased from 19 percent to 11 percent YoY.

Another positive sign, at least on its face, is that for two years running, more than half of surveyed professionals said they believe their company is “doing enough to live out the values of DEI.”

On the one hand, it’s an encouraging statistic, “given the [survey’s] audience of compliance professionals, who probably see more behind the veil than others,” said Alexander. On the other, “Only half of us are saying we’re doing enough. … It still leaves a lot of room for improvement.”

DEI accountability and the bottom line

Zooming in, the survey unearthed complications and hindrances to meaningful change.

When asked which metric their company relies on most to ensure accountability in DEI efforts, respondents primarily chose workforce demographics (42 percent). Apart from the risk of tokenism, looking to your workforce for a view of DEI accountability can misrepresent perceptions of equity and inclusion.

“The makeup of your workforce is what your culture surveys will reflect,” Alexander pointed out. Instead, she suggested looking at the types of candidates your company receives. “I always like to say the best candidate should shine through, so what is your pool of applicants like? Does your candidate pool reflect the DEI in the workforce you would like to create?”

Whether looking at hires or candidates, DEI progress cannot be boiled down to demographic composition. As a component of culture, it’s grayer than that.

In his report, “Measuring Culture,” Kai Wu of Sparkline Capital wrote culture is “multidimensional. Unlike earnings or sales … company culture is expressed in many ways.” Moreover, “While everyone knows culture is important, no one knows how to measure it. Culture is a fuzzy concept, whose many facets cannot be reduced to a single number,” he wrote.

Perhaps this fuzziness explains why survey respondents attested their companies are “doing enough” to live out DEI values while also displaying ambiguity around how their companies measure it. Case in point: Training ranked third in most relied upon metric (20 percent), yet it was the most frequently occurring response to the question, “Which of the following are among your company’s DEI efforts?”

This intersection of data suggests DEI training may be widespread, but it’s also inadequate. A skeptic might say it offers a semblance of progressive action while failing to fuel or measure real change.

“These are the beginning phases of [change] and shouldn’t be discounted,” said Alexander. However, training can’t be about clicking through a slide deck.

“It’s such a sensitive time for our country and culture as Americans that we really have to invest in the right types of training and then offer segments of feedback or pulse surveys to react to the training presented,” she said. “DEI training feedback offers leadership a chance to create a psychologically safe environment for dialogue and questions to grow the culture.”

Of course, there are always those who swim against the current. Asked how a diverse workforce/workplace most improves their company’s bottom line, 8 percent of respondents chose, “It doesn’t.” 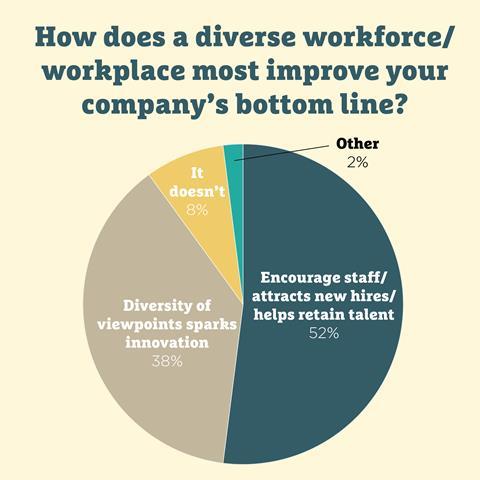 “That feels like a lot,” Alexander said. “Buy-in comes with finding value in a changing culture, even if it’s hard. Knowing the ‘why’ behind this statistic could unlock a lot of insight by listening to a small but telling group of respondents—even if their opinion is different than those committed to DEI initiatives.”

An interesting tidbit about that cohort is 53 percent were CCOs/CECOs.

More professionals in compliance-related roles pushed DEI efforts for their companies in 2021 than a year prior.

The number of survey respondents who chose “I don’t have a role” decreased, while the percentage who said they provided oversight, were part of a DEI committee, or were advocates of DEI increased. Variations in wording YoY could have affected results (i.e., in 2020, the “advocate” option was called “evangelist”).

The past 1-2 years of social injustice and unrest has led to compliance’s role being elevated, said Alexander.

“It’s very good to be invited to the table and to be another voice and perspective,” she said, “but in a time when additional pandemic duties are stretching everyone’s capacity, it could feel initially like, ‘Who can be the most accountable for this thing?’ That’s where it’s important to remember DEI efforts right now consist of a lot of gray area, and we compliance professionals live in the ‘gray.’ Assuring we are part of DEI advisory groups and/or committees ensure we get the opportunity to reinforce the expertise brought by our legal and HR colleagues that are also often engaged in these matters.”

Most respondents indicated compliance should be involved—for example, as part of a committee (43 percent) or an advisor (21 percent)—but not own DEI. Alexander agreed with limited involvement, saying while it’s good to have a compliance person present because “they don’t usually have a dog in the fight,” compliance doesn’t need to oversee the policies or actions. There should be more collective liability.

The outlook on DEI in 2021 is ambivalent. More than 90 percent of professionals surveyed agreed diversity, equity, and inclusion benefit organizations. They may arrive at that conclusion through different pathways of logic, but the endpoint is broadly the same. And yet, despite the consensus, it is unclear who is best positioned to drive the DEI bus organizationally.

No one seems to want to slide into the driver’s seat. Just 1 percent of respondents selected chief diversity officer (CDO) as the job title to which they aspire. Only two respondents self-identified as CDOs, and in both cases, neither said they “have the job they always wanted.” Instead, both indicated they see their current role as a pitstop or stepping-stone to a different job title.

Why is the CDO position not a more coveted role, given the buzz around DEI?

“I can speculate and say some might feel currently in compliance we’re just barely securing our profession on the map in the past two decades or so. Who has the grit to pick up that next battle and trudge up the hill for the newest role in ethics? There may be a little bit of that, but I also think maybe it means people don’t immediately see or apply long-term value to a clear, dedicated role for DEI, which is a little bit disheartening,” said Alexander.