Tips from a project management expert on avoiding failure

It’s astounding large organizational projects cost upwards of $100,000 on average and have a failure rate of 60-70 percent. No wonder that in a 2020 McKinsey study, project management was identified as one of the top three skills prioritized by organizations.

Reasons for failure include:

So, what does this mean for us in compliance and ethics? We are routinely asked to lead or assist major cross-functional projects that affect organizational reputation and risk. Whether it’s implementing a healthcare fraud and abuse control, responding to new regulatory reporting requirements, or upgrading the employee helpline and investigations process, it might be wise for compliance to request the services of a professional project manager to ensure the success of its initiative.

Antonio Nieto-Rodriguez has been named the No. 1 project management expert in the world by Thinkers50 and wrote the “Project Management Handbook” for Harvard Business Review that published in October 2021.

For these reasons, the most successful projects have people who spend 100 percent of their time on them, starting with the project manager and including the main contributing team members. Nieto-Rodriguez recommended small to midsize organizations should not carry out more than three large strategic projects at a time.

It’s important to distinguish between a true project—a project that requires formal project management—and a minor or routine project, which can be carried out following a set of guidelines. For example, writing an annual report could be seen as a project, yet would not require a project manager. There is an established process and designated responsibilities for report creation, which does not involve special sponsorship or budget or raise challenging and novel issues. True projects generally involve fresh challenges not faced by the organization previously.

On this point, most corporations have too many projects. Nieto-Rodriguez joked he’s come across some organizations that have more projects than employees.

“That’s crazy, right?” he said. His observation is that many organizations take on too many projects because they’re easy to kick off.

“You just need to have an idea and call a kick-off meeting,” he said. However, most companies are poor at closing or stopping projects. This leads to a glut. 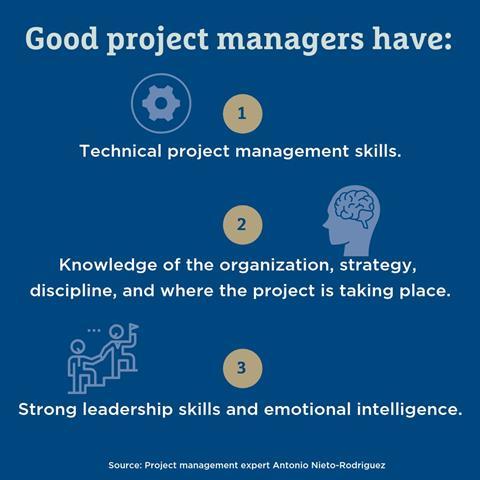 “I always tell leaders that if you’re going to start a new project, make sure you first stop or finish two or three other projects,” he said. Most senior leaders—despite their critical role—have not learned how to prioritize, select, stop, or effectively sponsor projects. The good news is there is a solution: Engage project management professionals who can advise leaders in making the tough calls.

A special challenge with compliance projects is they usually increase in scope and size. You start with a new risk that needs to be addressed, thinking it will be a small task. A few days later, it becomes an official project, and in some cases it morphs into a massive program. Other stakeholders might piggyback their pet projects, taking advantage of the knowledge that a compliance project is often of a mandatory nature.

Another point on compliance and ethics: If you define the problem and what the process will solve, compliance issues can be approached as a continuous improvement, rather than requiring the intense resources of a standalone project.

A trend in organizations is to automatically include compliance as part of the initial project team. For compliance and ethics leaders, while our having a seat at the decision-making table has often been hard-won, it can also lead to resource constraints.

If you or your team find yourself in that situation, it is best to assign an appropriate team member to attend the first two or three project meetings, sketch out the scope of compliance involvement, and then stay in touch with the project leads (but not necessarily attend all the meetings). Point out the red flags and educate stakeholders on when you need to be brought back into the project. When using a responsibility matrix (e.g., “RACI”), often compliance needs to be informed or give consent but does not need to be involved in much of the day-to-day work.

There is an ongoing debate—even confrontation at times—between the two major styles of project management: waterfall and agile.

Waterfall methodology follows a linear approach to advancement of the project in steps that are mapped out in a logical and progressive pattern. Requirements are clearly defined at the outset. Illustratively, waterfall is similar to buying an empty plot of land, waiting to build the house until you have all the architectural plans in place, and then executing each piece of the project step-by-step.

Agile methodology got its start in the boom of the internet and information technology in the early 2000s. It is the approach of working right away and iteratively on the deliverables of a project, in what are called “sprints.” Agile breaks a project down into small, consumable increments; measures progress along the way; and makes pivots when necessary.

In the house example above, agile would start building the kitchen without detailed plans and could design the critical placement of the “cooking triangle” (sink, fridge, and stove) by studying the homeowner’s habits in the actual space. The benefit of agile is its ability to address problems in real time, test and absorb new information quickly, deliver value more rapidly, and avoid major customer issues later that might become harder to address.

“If you’re going to start a new project, make sure you first stop or finish two or three other projects.”

Both approaches to project management have their strengths and benefits, and Nieto-Rodriguez believes they should be considered tools in the toolbox along with a few others, such as design thinking and Six Sigma.

Change is happening so quickly in organizations that a mix of both agile and waterfall methodologies is often beneficial. When you have a large traditional project, waterfall might make more sense because it focuses clearly on outcomes, breaking down time and workload.

If the project is novel and outcomes are not clear (e.g., exactly how the company’s existing processes might be developed to comply with a new, evolving regulation), agile might be more flexible to start.

Without a defined end goal, agile can begin work on achieving an initial desired user benefit as a starting place and modify the project in real time as new information is provided. Customer collaboration and rapid change responsiveness are key hallmarks of agile. Use the right tool for the right solution.

When considering project leadership, a project management professional designation from the Project Management Institute is a solid credential. More recently, there are certifications for legal project management and continuing executive education programs cropping up at universities. You also want to vet whether the person has had experience managing similar projects in the same field.

However, emotional intelligence is even more important than a project management credential. “If you’re not a people person—if you create fear in the team and just don’t like people—it’s not going to work very well,” warned Nieto-Rodriguez.

Although different disciplines, desirable qualities for project management are identical to those required to be effective in compliance and ethics.

Amii Barnard-BahnA former Fortune Global 50 executive, Amii Barnard-Bahn has been recognized by Forbes as one of the world’s leading coaches for legal and compliance professionals and their teams.