Upon meeting Tamar Frankel, two palpable features strike the senses. One is a deep well of kindness behind her eyes. The other is a formidable air of intelligence. When she speaks, the listener is rewarded with a generous helping of profound knowledge.

Born in Tel Aviv in 1925, Frankel’s 50-year career as a law professor at Boston University (BU) School of Law more than satisfies a checklist of lifetime achievement credentials on its own. Her title now is Professor of Law Emerita, Latin meaning “having served out one’s time; having done sufficient service.” Certainly, she has done that.

Yet, to limit the scope of Frankel’s achievements to her academic career would be a massive oversight. 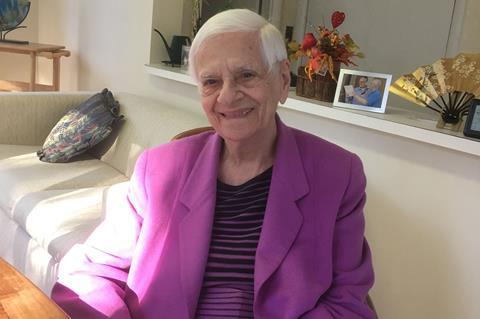 Tamar Frankel will turn 97 years old on July 4, and she is writing her 12th book. Asked whether she prefers teaching or writing, Frankel paused. “I would say it’s easier for me to write now,” she replied eventually. “Writing lasts longer.”

In the late 1990s, Frankel helped establish the corporate structure of the Internet Corporation for Assigned Names and Numbers (ICANN), a nongovernmental entity that manages the internet. Prior to that, Frankel served as visiting scholar at the U.S. Securities and Exchange Commission; legal adviser of the State of Israel Bonds Organization in Europe; assistant attorney general for Israel’s Ministry of Justice; an attorney for the Israeli Air Force; and in her early teens, a volunteer for the Haganah underground defense force before Israeli statehood.

While Frankel might have retired from full-time teaching in 2018, there are many lessons to be gleaned from her even today. She has published 11 books and countless law review articles and other papers. Frankel’s contributions to society are as plentiful as they are historic.

Frankel was the first woman professor ever at BU’s School of Law in 1968. She received a mixed reception from her colleagues at the time for not only her gender but her ethnic religion.

“I’ll never forget it,” Frankel told Compliance Week over tea at her home. “My BU colleagues and I were standing in the corridor, and one said, ‘You Jews, you always want everything.’ I opened my Israeli mouth and said, ‘Yes, because we are smarter, we are hardworking, we are honest, and so we deserve it more.’”

Frankel’s eyes twinkled at the memory. “He was expecting me to break into tears, but it didn’t occur to me to do that,” she said.

She suffered no fools but held no grudges. Later, Frankel and the colleague made amends. “I played the piano since I was three, and he loved classical music,” Frankel explained. “We became very good friends.”

Frankel is considered a living legend in the areas of fiduciary law, corporate governance, mutual funds, and the regulation of the financial system. But in 1968, it was the steely strength of her character—an innate drive toward perfectionism and a voracious love of learning—that made her unstoppable.

“I’m curious about what I don’t know,” Frankel said, imparting a main principle of her life’s work. “When you don’t know something, you’re not stupid. You’re curious. You don’t only want to know, but you want to understand. There’s a big difference between the two. Understanding is why. It is how.”

Navigating an all-male work environment was the least of Frankel’s concerns. “Coming to America was, to some extent, not very difficult because I had already seen quite a bit from a very early age,” she said.

Frankel’s brain had always been investigative by nature, but formative experience gave rise to the depth of her wisdom.

When she was 14 years old and an active member of the Haganah, she was arrested for breaking the curfew the British imposed because of a misunderstanding by the group’s commander. She was then found and released by paying a fine.

“What it taught me was what it means to be in prison. It’s something I have carried for the rest of my life,” she said. Frankel recounted a series of other memoirs from her early life in her book, “Living in Different Cultures.”

As an adult, she was on hand for the prosecution of Adolf Eichmann, Nazi perpetrator of the Holocaust who fled Germany after World War II. Eichmann was captured near Buenos Aires, Argentina, by Israeli intelligence agents in 1960 and brought to Jerusalem to stand trial for war crimes, crimes against humanity, and crimes against the Jewish people.

Frankel was working for the Israeli Department of Legislation at the time.

“I was involved in that trial,” Frankel said. “Eichmann viewed the people in the camps as things. There was absolutely no empathy. The result was they killed them, took the gold from their teeth, and made lampshades out of the skin. I had nightmares listening to all of that, but for some of the Jews who escaped and came to Israel, this was a release.” 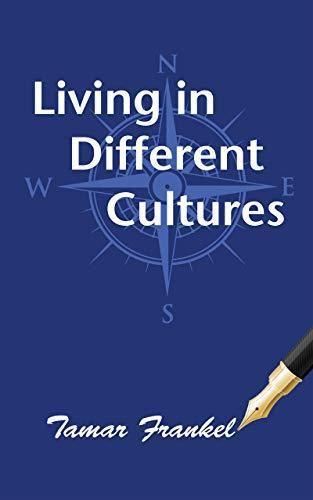 Frankel recounts her cultural experiences in her 2019 book, “Living in Different Cultures.”

Eichmann was found guilty on all charges and executed by hanging in 1962.

Frankel drew wisdom from the experience and applied it across her career.

“I don’t pay attention to how different people are but what connects us. What is the common denominator? Then,” Frankel’s eyes lit up, “I do pay attention.”

She added, “I find what is needed across the world: human relations. If we’re not killing each other, how do we live together?”

Decades later, she exercised the same principle during the formation of ICANN, where she facilitated the creation of the multistakeholder model. She chaired meetings between stakeholders—global business leaders, government officials, and technical experts whom Frankel described as “brilliant”—and helped them reach a consensus on how the corporation should function.

“They were fighting,” Frankel said. “I said I wasn’t interested in what they did not agree on. I told them to present me with a list of things they did agree on.”

ICANN was in no small part established because of Frankel’s capacity to promote cooperation over conflict and inspire collective belief in a shared goal.

Though she spent five decades there, BU was not the first American university to roll out the welcome mat to Frankel.

One day, Frankel met Louis Loss, a Harvard Law School (HLS) professor, at an international meeting in Jerusalem. Frankel had been practicing law in Israel for 15 years by this point.

“I knew Israeli law, but I also knew British law. The school (Harvard) was looking for a foreign injection if you will,” Frankel said. Loss invited Frankel to be a visiting scholar at HLS.

So, she went. She earned her Master of Laws in 1964 and Doctor of Juridical Science degrees in 1972.

“Professor Loss is the father of securities regulation. He suggested I take part [in securities regulation] because there was very little written about it at that time. He saw a need, he knew me, he made the suggestion, and I found it fascinating because I didn’t know anything about it,” Frankel said.

A solution-seeker by nature, she wanted to understand the why and how behind the stock market crash of 1929. What was the problem, and how could it be avoided in the future? A 50-year teaching career in securities regulation, mutual funds, corporate governance, and compliance ensued.

In effect, Frankel staked her legal, academic, and authorial careers on the concepts of trust, cooperation, and prevention of wrongfulness. The echoes of her core value system are especially germane to compliance.

“Compliance is built on a culture of trust backed by respect, supervision, fairness, and strict adherence to certain values,” Frankel once wrote in an email to Compliance Week.

In her most recent book, “The Law of Institutional Self-Regulation (Compliance),” Frankel laid bare several philosophical tenets informed by her knowledge of law, finance, regulation, and human nature.

Frankel expounded on these tenets with Compliance Week.

“We are creatures of habit. If you start by doing something that is a little wrong and nobody pays any attention and there is no reaction, it becomes a habit. Once you do that, a little more of the wrongfulness is not too terrible. Then it becomes (No. 1) second nature and (No. 2) justifiable. Then it grows again, and you get the shock of your life when you are caught,” Frankel said.

She pointed to the fate of Bernie Madoff’s Ponzi scheme as an illustration of this tendency; the desensitization of the Nazis as another.

“Habit doesn’t start by killing. It starts by giving a slap to somebody’s face. And then it becomes comfortable to do it again. To some extent, the Nazis, who really treated humans in an inhuman way, had to separate themselves from the identity of the other people, but they didn’t start there. It ended there,” explained Frankel.

2. Because we may make mistakes, we must automatically disclose and correct them.

“A mistake, by definition, does not have intention, but lack of correction has a bad intention,” Frankel said. “It misleads, and you know it, and you’ve done it. In law, intention is one of the main parts of a violation of the law, but I think it is true in personal relationships as well.”

3. This disclosure and correction should carry the greatest respect and reward.

“This is the solution to when you make a mistake. Stand up and say, ‘I made a mistake. This is why, and this is how.’ … Time and again, whenever I did that, I was surprised to have a following—just the opposite of what you would think,” Frankel revealed.

“No one feels very good about saying something negative about themselves, so when somebody says, ‘I am wrong. I was wrong,’ it has a weightier value. Truth and honesty are more important than ego. That is why it is so valuable,” she said.

4. The above points may be the foundation of a thriving enterprise.

“Culture is established by behavior that is being followed. The question is: How do you reach the point where you’re an organization that makes rules of what we simply don’t do here?” Frankel asked.

She pointed to compliance officers as stewards of culture. “You are one of the police inside, but you don’t have to rely on [inspiring] fear of punishment,” she said. There are other, lower types of enforcement mechanisms when it comes to promoting strong culture, such as personal relationships and support.

“Support can not only be helpful but cause elation,” Frankel said. She added, “You (compliance officers) have to support middle management, because middle managers know everyone.”

By nipping violations in the bud and rewarding values of honesty and shared purpose, an enterprise can build something greater than anything one could achieve alone. That is the backbone of healthy culture.

“I don’t pay attention to how different people are but what connects us. What is the common denominator? Then, I do pay attention.”

Frankel will turn 97 years old on July 4, and she is writing her 12th book. Yet, fame has never been her aim, she said. Once a teacher, always a teacher: She gets tremendous satisfaction out of knowing people in various parts of the world read her books and learn something from them.

Asked whether she prefers teaching or writing, Frankel paused. “I would say it’s easier for me to write now,” she replied eventually. “Writing lasts longer.”

The beneficiaries of her instruction—those throngs of former students who are now lawyers, judges, academics, writers, and government officials themselves—might disagree.